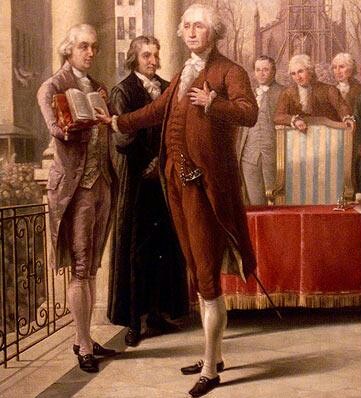 After taking the oath and adding the unscripted "so help me God", Washington, Adams, and the members of Congress proceeded to St Paul's Chapel nearby to hear divine services, as was resolved by Congress as standard inaugural procedure three days prior. The service was led by William Provost, Episcopal Bishop of New York and chaplain of the Senate (also, interestingly, a former rector of Trinity Church, which I've posted pictures of before).

Before the custom was abolished by Elizabeth I, it was usual in England at the annual state opening of Parliament for its members to accompany the king to Westminster Abbey to attend a votive Mass of the Holy Ghost. It seems to me like a good idea for Catholic churches everywhere in the United States to continue the spirit of this old practice by celebrating a votive Mass of the Holy Ghost on the day of a presidential inauguration. This may be even more true if you hate the new guy coming in, rather than because you like him.

(Also note Washington's wearing of a sword, as commander in chief. He also deliberately wore a fashionable domestic-made suit as a gesture of faith in American industry.)

Posted by The Modern Medievalist at 3:55 PM