The Annunciation and the cycles of life

As you may know, the feast of the Annunciation, celebrating the conception of the Lord in the Virgin's womb, was transferred to the first day after Easter week because its usual date; the 25th of March, precisely nine months before Christmas; happened to be Good Friday this year. It will not happen again until we are all but ashes and dust: AD 2157.

The Annunciation, like most other feast days, enjoyed a much higher degree of observance in the medieval world and remained a holy day of obligation until the 1800's. In England, it was Mary Day, reckoned as the first day of the civil year all the way up until Great Britain (and the American colonies) adopted the Gregorian calendar in 1752. Though we in the West moved the feast to the first available day so it wouldn't conflict with Holy Week and the octave of Easter, I'm told that the Eastern churches observe both Good Friday and the Annunciation together whenever they coincide. There is a beauty to this: the Lord's earthly life beginning the same day it ends. To the modern imagination, it's another piece of medieval macabre, but I like to think it enforces our teaching that life begins at conception. Furthermore, it was long part of our tradition, extending even before the Middle Ages, that March 25 was the "historical" date of the Crucifixion. I don't care to test the truth of the claim now because the message is more important: Christ is the Alpha and Omega, beginning and end. The poet John Donne knew as much and wrote, on this phenomenon in 1609:

"All this, and all between, this day hath shown,
The abridgement of Christ’s story, which makes one
(As in plain maps, the furthest west is east)
Of the Angels’ Ave and Consummatum est." 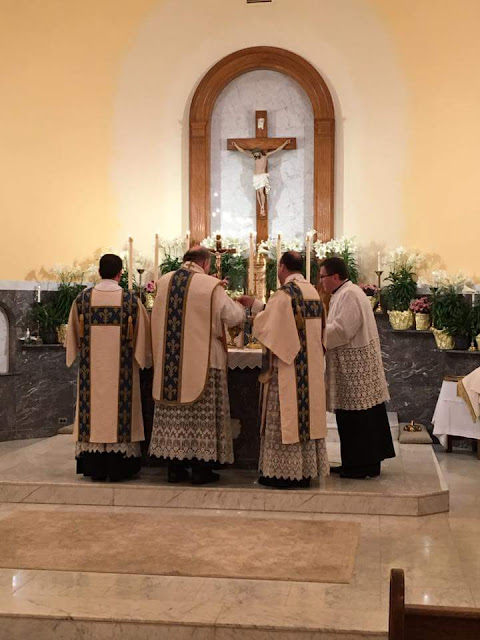 I was privileged to observe yesterday's feast by attending and singing some of the proper chants at a solemn high Mass in the traditional Latin rite last night. (The Communion antiphon, Ecce virgo concipiet, has been stuck in my head for years thanks to its appearance in a chant CD that I listened to in my car for years.)

There's a special significance I just realized about the venue chosen for this Mass. This parish hosted one of the "Anglican" Ordinariate communities for some time following their exodus out of the Episcopal Church. Though they merged with another Ordinariate community closer to Philadelphia and acquired a church property to call their own this past Advent (and of which I'm now a member), that fledgling group of converts used this church as a refuge, "baking" like the infant Jesus in Mary's womb following the angel's annunciation, until they were ready to come forth and take their place as a proper parish in the life of the greater Church. And now, the pastor who celebrated this Annunciation Mass pictured above will be attending our Ordinariate community's first solemn Evensong with Bishop Lopes when he arrives this Friday for a visitation.

It seems this life is a pilgrimage in which the liturgical year allows us to live over and over again in cycles, but not in an infinite circle like that imagined by the pagans of old; rather, loops in a spiral that extends ever higher until, we may hope, we find peace in the everlasting kingdom upon which the sun never sets.

Behold, a virgin shall conceive, and bring forth a son: and his name shall be called Emmanuel. (in Eastertide) Alleluia.

Posted by The Modern Medievalist at 1:44 PM