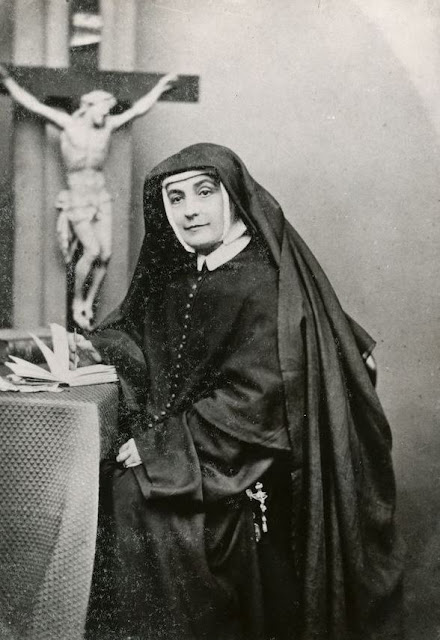 From April Fools to hailstorms in Texas, there must be something about this month that brings out the bizarre. Around this time last year, I was moved to write about an eccentric Victorian entitled Weird Wednesday: Montague Summers, vampirologist and priest (maybe).

Perhaps it's time to make a tradition of it. Today I present you a brief sketch of a local treasure in my current area (Philadelphia): the Venerable Cornelia Connelly. In truth, I posted this on my personal Facebook page a few weeks ago, but my thoughts returned to her story and decided to share it on my blog as well, even though it has little to do with medievalism per se (though is perhaps of interest to my brethren who belong to one of the Personal Ordinariates, etc.). If you find her story interesting, I encourage you to do more reading on your own, especially the case of Connelly v. Connelly. I barely scratched the tip of the iceberg with this little post.

This is one of the most colorful, tragic characters I've discovered while digging through the annals of Church history: (Venerable) Cornelia Connelly, foundress of the Society of the Holy Child, local Philadelphia treasure... and one of the only women of the Victorian age who could call herself wife to a Roman Catholic priest.

Cornelia Peacock was born in 1809 to a wealthy Philadelphian, Presbyterian family. At 22, she married a handsome Episcopalian priest named Pierce Connelly. Pierce was an intelligent, charismatic up-and-comer in the Episcopal Church and was considered by many to be on track from a bishopric. As waves of Irish and other Catholic immigrants poured in, he started reading about the Catholic faith for the purpose of refuting it, but he ended up with a crisis of faith and desired to convert instead. Even at this early stage, he was thinking of becoming a Catholic priest, so he traveled to Rome before being formally received into the Church to "discuss his options", as they were. Cornelia was to meet him there with their children, but she went ahead and was received into the Church on her own in New Orleans while waiting for a ship to Europe.


Pierce apparently pleaded so artfully that he moved Pope Gregory XVI to tears and was received into the Church by the Holy Father himself. Priesthood, however, would not be conferred so easily. Today, former Episcopal clergy can be dispensed by the Pope to become Catholic priests even while married through the Pastoral Provision and Personal Ordinariates, etc. In the 19th century, though, a married man could only become a priest in the Latin Rite if he and his wife mutually agreed to take perpetual vows of chastity and live separately. Pierce was advised to consider becoming an Eastern Rite priest instead, but as there were no Eastern Rite parishes in the United States to serve at the time, he pressed on with a vocation to orders in the Latin Rite.

Cornelia was still pregnant with their fifth child when he announced his intention to become a priest and break up the family. She urged him to reconsider, but said that if God was asking this of her, she would conform to His will. It's a wonder that Rome agreed to any of it, but Pierce was a skilled orator. The Pope even gave him the gift of a large fish to signify what a great "catch" he was for the Church... or so it seemed at the time. Meanwhile, Cornelia discerned a call to religious life and entered a convent in Rome that gave her special permission to bring her children with her. (It should be noted here that Cornelia was never at any point obliged to become a nun as a condition of Pierce becoming a priest. The Cardinal Vicar of Rome said as much and told Cornelia her first duty was to her children, but he didn't dissuade her from religious life, either.)

In 1845, Pierce was ordained a priest in Cornelia's convent's chapel with their children present. Shortly after, Cornelia was sent by Pope Gregory to England to establish a new religious house and educate Catholic schoolchildren there. The Society of the Holy Child soon took on schools, parish apostolates, night classes for young factory workers, and more. Pierce went to England as well to take up a post as Lord Shrewsbury's personal chaplain; the very same Earl of Shrewsbury who patronized the building of Saint Giles, Cheadle and many other of Augustus Pugin's works. As for the children, Bishop Wiseman ordered them to be sent to boarding schools to avoid the appearance of scandal.

After a year of total separation, Pierce traveled to Derby and showed up at Cornelia's convent unannounced. Personal visits of this kind between the two were, if not strictly forbidden, at least seriously frowned upon; and Cornelia reproached Pierce for it. Pierce started writing letters to her, confessing his continued physical desire for her. Cornelia took solemn vows in 1847, but Pierce refused to attend. A month later, he took the children out of boarding school without telling Cornelia, putting the youngest in a secret home and taking the rest with him back to Italy in the hope that Cornelia would abandon her vows and return to him.

To make a long story short, after falsely claiming to be the founder and superior of the Society of the Holy Child before Roman authorities (in an attempt to thereby become Cornelia's religious superior!), as well as an apparent failed bid to earn a cardinal's hat (though he was only a priest for three years), Pierce renounced his priesthood and the Catholic faith entirely. He sued Cornelia in court to get her to return to his bed, conveniently omitting all mention of his conversion to Catholicism and priestly ordination to the Protestant judges and juries. The case grew notorious in England, with Cornelia's effigy featuring in Guy Fawkes Day parades and some pressure from the English Catholic hierarchy to Cornelia to move back to America, but she persevered and eventually won the case. She lost, however, all custody over her children and suffered a strained relationship with them for the rest of her life. Only one returned to the faith later on.

Pierce apparently spent the next thirty years making a living off of writing salacious anti-Catholic tracts, some directed against his own wife, which caused Cornelia even greater suffering. But whatever acclaim Pierce may have enjoyed in his lifetime, history has judged him to be a petty and insignificant soul. He is now remembered solely in relation to his wife, whose legacy and Society continues to this day, in Philadelphia and around the world. Although the Sisters of the Holy Child themselves were once embarrassed to speak of their foundress's personal history, she has been called Venerable since 1992 and may, one day, be a saint... if we can ever get over the sheer strangeness of her life story. 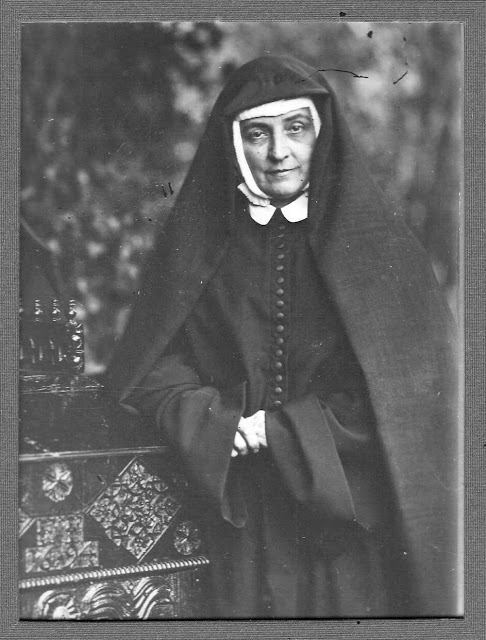 Posted by The Modern Medievalist at 1:27 AM