Last night in Catholic churches around the world, the tabernacles were emptied and the Eucharist was carried in procession to another altar, called the altar of repose, there to remain until the "Mass of the Presanctified" on Good Friday. Before the Reformation, however, and most especially in England, a second shrine was set up during Holy Week to reserve the sacrament: the Easter sepulchre.
After the Good Friday ceremonies and the "creeping to the cross", which commemorate the ultimate sacrifice of Christ's crucifixion, the crucifix which the whole congregation in these "superstitious" days was then wrapped in linen, as though it were a burial shroud, and then carried in procession to a niche, a wall recess in the north side of the church, which was designed just to appear like a tomb. There, after the priest and deacon removed their vestments and shoes, the crucifix was "entombed" in a chest, along with a pyx carrying a Host that had been consecrated on Maundy Thursday.
The priest intoned:

"I am counted as one of them that go down into the pit: I have been even as a man that hath no strength, free among the dead."

And the people responded:

"Thou hast laid me in the lowest pit, in a place of Darkness and in the Deep. There have I been."

With Christ's real presence entombed, decorated with velvet hangings, and candles lit all around this Easter sepulchre, a watch was appointed to keep guard over the sepulchre at all hours until just before daybreak on Easter Sunday. (So, it seems, even if the Vigil of Easter was celebrated on Saturday morning, the devotions surrounding the Easter sepulchre ignored it.)
The best surviving examples of Easter sepulchers range from the 14th to 16th centuries. See below:
After Henry VIII declared himself Head of the Church of England, he still attempted to preserve the sepulchers, his convocation declaring:

"On Good Friday is prepared, and well adorned, the Sepulchre in remembrance of Christ's sepulchre, wherein is laid the image of the Cross with the Most Blessed Sacrament to signify that there was buried no corpse or body that could be corrupted but the pure and undefiled Body of Christ without spot or stain, which was never separated from the Godhead." 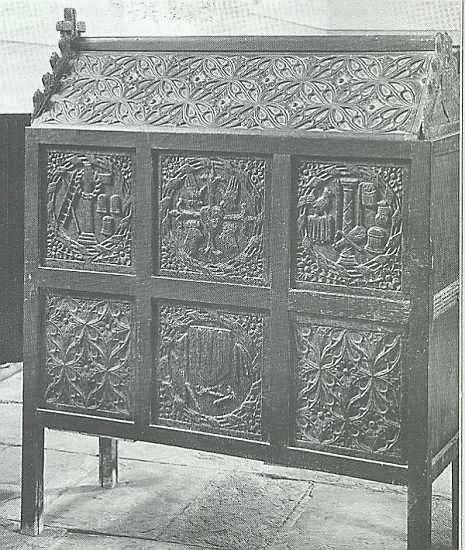 Nonetheless, Cranmer, archbishop of Canterbury, secretly despised the sepulchres and all similar displays of religion, so shortly after the boy king Edward VI acceded the throne, Cranmer and his lackeys passed laws ordering their destruction. We have surviving records of how vicars sold their wooden chests used for the sepulchre to profane use. One, for example, used the coffer to store his clothes; another, to serve as a dish rack. Queen Mary's brief restoration heralded the return of the sepulchres, but with her sister Elizabeth, they once again went into abeyance.
Augustus Welby Pugin was the first designer of the modern age to build Easter sepulchers in his churches. As you saw at the top of the post, his sepulchre at Saint Giles, Cheadle, as with the rest of the church, stunned all who glanced upon it. It seems to have never caught on even in Pugin's own lifetime, for he routinely complained that the priests who took over his churches didn't know what to do with them: "The truth is the churches I build do little or no good for want of men who know how to use them. Dudley is a complete facsimile after an Old English parish church and nobody seems to know how to use it.". (A.W.N. Pugin: Master of Gothic Revival, page 57)
The one thing we can be thankful for, perhaps, is that the successors of Pugin's churches were so completely ignorant of the customs surrounding their furnishings that when the iconoclasms of the 1960's came around, few of Pugin's sepulchres were destroyed because no one knew what they were for in the first place.

Terra tremuit! (the Offertory antiphon of Easter Sunday)
Posted by The Modern Medievalist at 11:49 AM