I'm going to open this year of 2015 with a short reflection on a paper I read from the Pugin Foundation, given to the Newman Society in Hobart (in Tasmania, Australia). It's called Mr Pugin the Bigot, and you may find it here.

Some background: Augustus Pugin and John Cardinal Newman were, arguably, the two most influential converts to Catholicism in England during the age of Victoria. When it came to how the newly emancipated and restored Catholic faith would express itself, though, these two luminaries were at odds with the other. Newman, father of the Birmingham Oratory, imported Italianate, Baroque architecture into England; stepping into his church brought a taste of papal Rome right to the English Catholic's front door. Pugin, champion architect of the Gothic revival, wouldn't stand for anything except the total restoration of that style which sprung forth from the minds and hands of native Englishmen during the most Catholic centuries, the 14th and 15th. Baroque churches, in Pugin's world, were gaudy imitations of heathen temples. The position led Newman to confide, in a letter to a friend, the title of the article linked above:

"Mr Pugin is a man of genius; I have the greatest admiration of his talents, and willingly acknowledge that Catholics owe him a great debt for what he has done in the revival of Gothic architecture among us. His zeal, his minute diligence, his resources, his invention, his imagination, his sagacity in research, are all of the highest order. It is impossible that any one, not scientifically qualified to judge of his merits, can feel a profounder reverence than I do, for a gift which it has pleased the Author of all Truth and Beauty to endow him. But he has the great fault of a man of genius, as well as the merit. He is intolerant, and if I might use a stronger word, a bigot. He sees nothing good in any school of Christian art except that of which he is himself so great an ornament. The Canons of Gothic architecture are to him points of faith, and everyone is a heretic who would venture to question them."

The author, Brian Andrews, supplies an extreme anecdote for an extreme character:

"One chalice tells us much about Pugin and Willson’s taste. In May 1847 Willson was given a chalice by Pope Pius IX. A typical Classical vessel for its time, it was abhorrent to Willson who took it back to England where Pugin made a new Gothic design. The Papal chalice was melted down, some extra silver added and an inscription engraved on the base of the new Gothic chalice ‘+ Gift of His Holiness Pius the IXth to Robert William + Bishop of Hobart Town + Rome + May + Mdcccxlvii’. Well it sort of was—at least most of the silver!"


(Willson here is Robert William Willson, first Catholic bishop of Hobart, Tasmania. He was a close friend of Pugin's and strong supporter of the Gothic revival in Australia.)
It's no secret where my sympathies in that whole debate lie, but I also wanted to draw some attention to some anecdotes from the same essay which dispel the whole notion of Pugin as the Grinch of Victorian England. Andrews submits a snippet from the writings of Pugin's son-in-law, John Hardman Powell, shewing the total harmony of someone who lived a fully liturgical, fully charitable life:

'At eight the Chapel bell rang for Compline, which was solemnly recited by Pugin in Cassock and Surplice, followed by the De Profundis, but too rapidly for a stranger to respond to readily. At nine supper in the brightest of Kitchens; the eldest daughter Anne, an elegant maiden was present and Miss Greaves, a family friend, who had kindly taken care of the children after their mother’s death. Rice pudding, Bread and Cheese, Celery and Water, was the simple fare, Pugin with Times in hand commenting on the news of the day.

'In the morning, bell at eight for prayers; Pater, Ave, Credo, Litany, short and quick, “no time for distractions”. The Chapel though small was complete for Mass, with organ in Sacristy … the windows were filled with Stained Glass, St. George, St. Augustine, St. Edmund, St. Cuthbert, with the Family beneath, holding petitions. Though simple, everything was of the best, Oak, Cedar, Encaustic tiles, and a small stove always burning in cold weather: “most people pray better when warm”.

'Pugin gave in Charity “with both hands” on the principle that life was too short for “chasing up only deserving cases” and “everybody must take their chance of being done at times”, in fact he literally gave away his boots more than once and walked home without. At offertories he never counted but took a handful of silver from his pocket. During the famine in Ireland, he sent all he could get together and influenced others to do the same. Shipwrecked foreign sailors were taken into special care, lodgings found, doctor, and sustenance. At that time there was no seamen’s hospital at Ramsgate so Pugin went and by his influence got one organised. Once a barque, full of poor Bremen Emigrants struck on the Goodwin Sands and were towed into the Harbour after great suffering. Finding eighty of them were Catholics he wrote to London for a German Priest and turned the Cartoon room into a Temporary Chapel where they went to confession heard Mass and received Communion. The Blessings they invoked on leaving were a real happiness.

'Pugin set himself to illustrate “True Principles” in the Household life. Reverence, order, simplicity, Holy Mass in the Chapel whenever he could get a priest friend to stay, then plenty of work, good food and exercise, the Church Festivals being holidays in both senses. … After the Church was built he enjoyed going into the choir as Cantor and singing the Mass from his big Gregorian books at the lectern, giving his most sonorous notes at the Credo and his daughter Annie accompanying on the organ over the cloister.'

The architect applied his concern for social justice to his profession in more than one way. When his friend, Bishop Willson, was sent to minister to the poorest of the poor in Tasmania, Pugin designed all of the furnishings the good bishop would need to set up a new diocese at no charge. And we can see in a sketch like that of two contrasted poor-houses below, from Pugin's Contrasts, that he believed his architectural vision extended not only to the great houses of church and state, but to house the less fortunate more humanely than the "cutting-edge" utilitarianist monstrosities then being built. 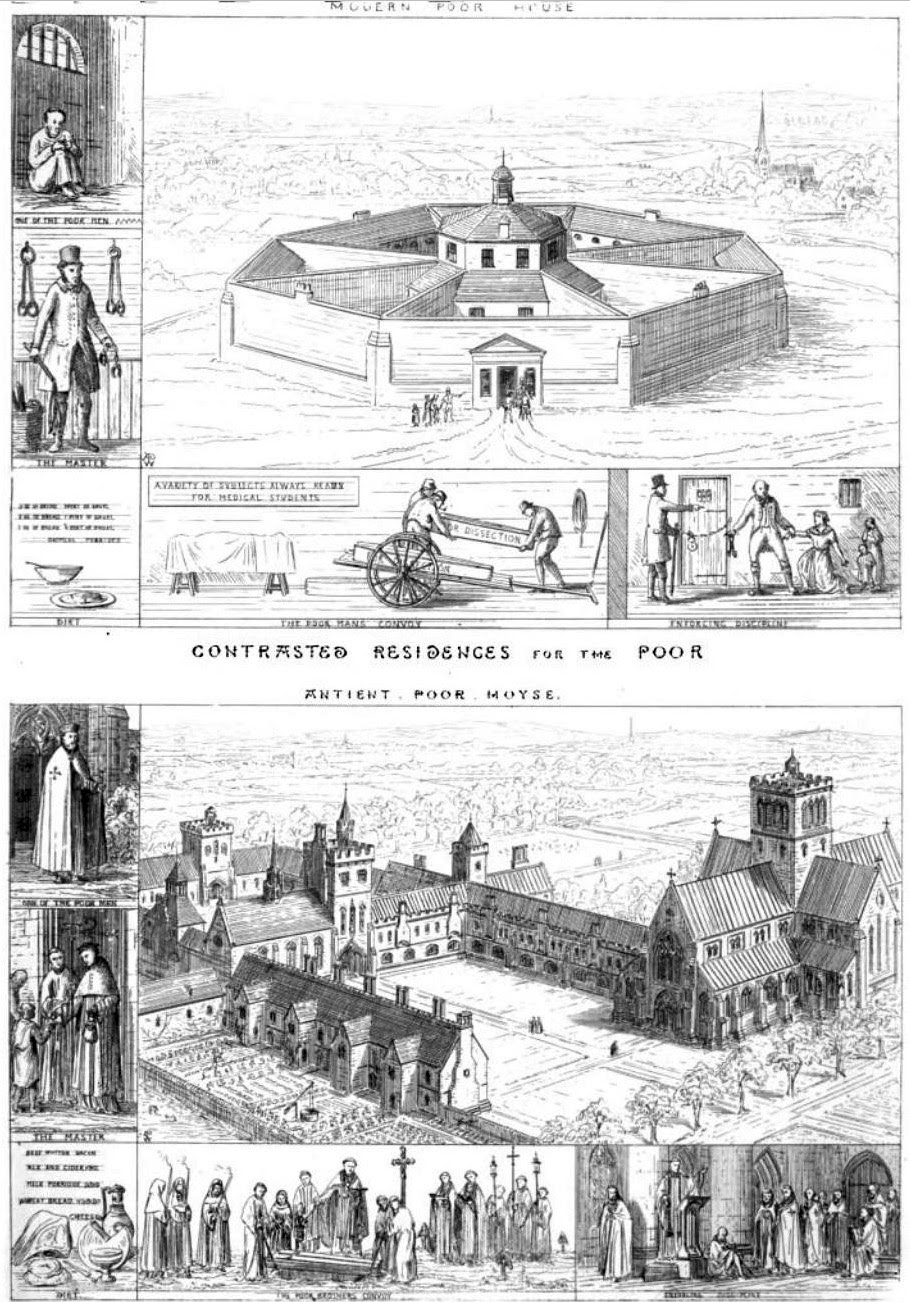 I'll end this brief foray into the mind of Pugin with some words from the man himself, shedding some light onto the spirituality behind his design:

'And the reason that Catholicism does not produce such glorious piles as in days of old, that it does not number a crowd of devout architects, painters, sculptors, and cunning workmen within its pale, as formerly, is purely owing to the decay of faith and the lightness with which even the majority of Christians regard their religion.

'If the mass of the Catholics of the nineteenth century possessed the same zeal, devotion, reverence and fear of God as those of the thirteenth, the Madeleine would never have arisen for the performances of the same worship as generated the stupendous vaults and towers of Notre Dame; but the latter was the spontaneous creation of the faith, raised by zeal and devotion—the former a cold adaptation of a heathen temple, erected by infidel architects to the purposes of a Christian church. Revive the true Catholic faith and devotion and the flaunting chapel, with all its glare and finery, will soon be deserted for the solemn recesses of the ancient piles, where men can pour forth their supplications in retirement and devotion, content to penetrate the veil of the sanctuary with the eyes of faith, and feel that they are scarcely worthy to kneel on the pavement of that temple where their God deigns to dwell. Restore the old reverence, and gladly will men welcome the old things—arch and aisle, and pillar and chancel, and screen, and worship as their fathers worshipped, who now sleep in Christ; and the green bough will twine in the tracery, and the tapers sparkle round the rood, and surpliced clerks sing in chancel stalls, whilst the saints shrine bright in the mullioned lights—venit hora et nunc est—when the old glory of the sanctuary will be restored and solemnity revived with returning faith.'

'… architecture is the barometer of faith; it is not the arch, the pinnacle, the pillar, that profiteth, but the spirit which produces them; and the revival or decline of true Ecclesiastical architecture is commensurate with that of the true faith. It is for these reasons that we labour for its restoration and not as a mere abstract question of art.'

Posted by The Modern Medievalist at 5:41 PM No comments: