Salvator mundi: what's a painting worth? 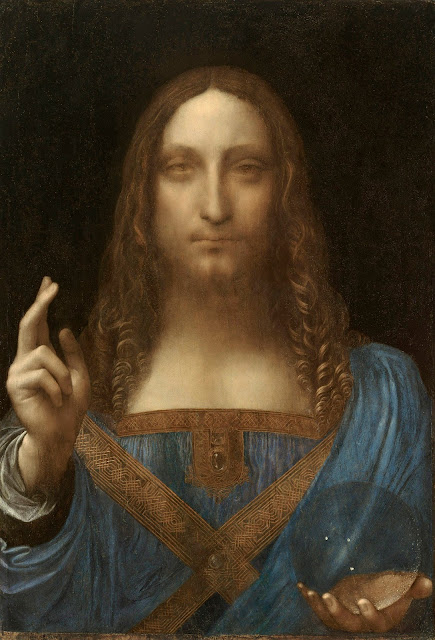 Yesterday, a painting which has only recently been attributed to Leonardo da Vinci just sold at auction to a currently-unknown bidder for $450 million--the highest price ever fetched for an artwork in history. This inquiring mind wants to know: who on earth has $450 million to blow on a painting that we may never know for sure is actually Leonardo's? Even if it's authentic, what is it about Leonardo's legacy that can possibly make any piece so valuable?

Since Leonardo da Vinci represents a key figure in the departure from the medieval world to the Renaissance, I haven't written much about him on my blog thus far. It's worth mentioning that despite Leonardo's fame resting mostly upon his skills as a painter, there are only somewhere around 20 surviving paintings that are universally acknowledged to be his. The greater appeal, when it comes to the cult of Leonardo, is the fact that he was an undisputed master of many trades all at once in both arts and sciences. Few in all of human history can claim to have had used left and right sides of the brain as fully as he. Like most of us in the 21st century, even Leonardo had to put his artistry aside and seek gainful employment in more "practical" fields. As I wrote back in 2015 in my post Who made the first resume?, when I was seeking a new job myself, Leonardo's resume of 1482 barely mentions his skill as a painter at all. Rather, the letter concerns itself almost entirely with his skill as a military engineer and designer of machines that kill as many people as possible! Then, as now, there was more money to be found in making war than in love...

As to the painting recently sold at auction, it's called Salvator Mundi (Savior of the World). The subject is our Lord Jesus Christ, bestowing a blessing with the right hand and holding a crystal orb with the left. My favorite aspect is the attire: a rich blue tunic with crossed orphreys that have a strongly geometric detailing, almost like that which would be used by dwarves of a medieval fantasy setting. Other viewers might find treasures in either hand. The hand of blessing is upheld as evidence of Leonardo's work because of its uncanny faithfulness to the musculature of a real human hand. (Even today, with the advantage of anatomical textbooks, hands and fingers remain the bane of many a traditional artist. Leonardo had to study this the hard way, by dissecting the corpses of executed criminals.) On the other, the crystal orb has been waved about as proof that the work couldn't possibly be a Leonardo because the real artist would have been smart enough to show a realistic display of light passing through the orb--with a real crystal ball, the image in the orb would be distorted and inverted. The apologists, naturally, claim that light passes normally through the orb in this painting because it shows the miraculous nature of Christ... just as, perhaps, certain mystical writers have said that the infant Jesus passed through the womb of the Virgin like light through a prism. 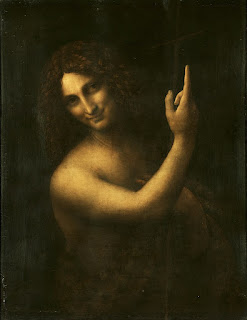 For my own part, the face looks convincingly like a Leonardo, particularly with his signature take on noses. What gives me the greatest pause is the totally upright, face-front posture which, frankly, seems far too conventional for a man of Leonardo's taste. In every other Leonardo portrait, the subject is turned at a profile or 45-degree angle, or is posed somewhat crooked, as though to show off his mastery of human anatomy (e.g. his "St. John the Baptist"). Every other portrait is a demonstration of how clever Leonardo is, but Salvator Mundi falls back to the tried-and-true conventions of medieval iconography. What you see is what you get: Christ as savior of the world, in the same posture as has been done by Durer, Hans Memling, or thousands of unnamed artists through the Middle Ages, both east and west. Perhaps the apologist would say that this conformity to convention is a sign of Leonardo's piety, or that he was commissioned to paint a Salvator Mundi and there's simply no other way to pose the figure of Christ other than as seen here.

Whatever the painting's true value, my favorite article on the auction is an op-ed in the Guardian by Anglican priest Giles Fraser: Salvator Mundi went for $450m. But you can have the real thing for free. He observes that Leonardo da Vinci and Martin Luther weren't far apart in history at all.

"Later Luther admitted that during this dark period he actually hated God, and hated the idea of a just God especially. His breakthrough, the so-called “Tower experience”, was through the extraordinary idea that God does not treat us fairly at all, but bestows his grace upon human beings gratuitously, far above and beyond what we deserve. In other words, human life before God is not all about us stacking up moral merit points, thus to guarantee our passage to heaven. Protestants disparage this as “works righteousness” and see it as a foolish and impossible task. The only way out of the trap of the human condition is to admit our moral incapacity and call on God for help. There is no way to bully or lobby the divine into doing this. Salvation is top down. And we are as dependent upon Salvator Mundi as we are dependent upon the rain."

Posted by The Modern Medievalist at 3:18 PM 4 comments: