A touch of the Gothic on this Texas Decoration Day: Elisabet Ney's monument to A.S. Johnston

Dear friends, don't fear; I am actually 75% done on a more substantial article. But allow me to briefly tell you about my experience this Memorial Day, especially my encounter with a pleasantly surprising touch of the Gothic revival where I least expected it.
Not long ago, I applied to join the National Society of the Sons of the American Revolution by right of descent from eight ancestors who fought in the war of independence, both in the Continental Army and the militias. The first event I was invited to was a Memorial Day service (or Decoration Day, as it's known among old-fashioned southroners) at Texas State Cemetery in Austin, which is mere blocks from the state capitol building. Though it's a very short drive from where I live, I've never visited until today, and I must say, it actually rivals some of the great cemeteries I've visited in the northeast. Here rest Texas governors, U.S. senators, generals, Medal of Honor recipients, Texas Rangers, and fallen servicemen of many wars. Two that bear special mention are Lieutenant Robert Rankin and Sergeant Stephen Williams, who were both not only veterans of the Texan Revolution against Santa Anna, but also veterans of the American Revolutionary War! Both had descendants who were present to eulogize their ancestors today. Rankin was a Continental Army officer from Virginia, a friend of Sam Houston, and an original member of the Society of the Cincinnati. Williams fought at the 1781 Battle of Eutaw Springs, South Carolina (along with one of my own ancestors, Lieutenant Joseph Culpepper, who was wounded there), and later participated at the siege of Bexar with four of his grandsons at the ripe old age of 75!
One section of the cemetery is reserved for the Confederate war dead. Here stands the most splendid funerary monument of the entire grounds: the tomb of CSA General Albert Sidney Johnston. Before the Confederacy, Johnston served in the Texas Army during our little revolution here as a private, then an aide-de-camp to General Sam Houston. When the war was won, Houston named Johnston commander of the Texas Army, but another general, Felix Huston, felt slighted. Huston challenged Johnston to a duel, but Johnston refused to fire on him, and Huston shot his opponent in the hip and assumed command instead. Fortunately for Johnston, the following year, second President of Texas Mirabeau Lamar appointed him as Secretary of State.
By the time 1861 rolled around, Johnston had distinguished himself in the Mexican-American War and was commander of the Department of the Pacific. He opposed secession, but when Texas threw in with the Confederacy, resigned his commission and snuck from California back to Texas to assume a new command: the Western Department. At the Battle of Shiloh, Johnston was shot behind the right knee, probably (like Stonewall Jackson) by friendly fire. Perhaps due to his injury from the duel years before on the same leg, he didn't feel it or think it was a serious wound, and sent his personal physician to tend to some captured Union soldiers instead. Later in the day, he died from blood loss, making him, as a full four-star general, the highest-ranking officer on either side of the Civil War to die on the battlefield.
So, where does the Gothic monument come from? Johnston was reinterred from his original burial site in New Orleans to Austin in 1867, but the monument wasn't raised until many years later, in 1905. The work was executed by local legend Elisabet Ney, a German-born woman who became the first female sculptor at the Munich Academy of Art. When she was a child, she declared her life goal was "to know great persons". She got a head start in that her great-uncle was Michel Ney, Marshal of France during the Napoleonic Wars, who famously gave the orders to the firing squad at his own execution after the fall of the emperor.
After graduation, Elisabet moved to Berlin and became a very successful sculptress. She came to know many great persons, indeed, for her commissions at this era included busts of Jacob Grimm (yes, the mythologist), Italian revolutionary Giuseppe Garibaldi, composer Richard Wagner, his wife (and daughter of Franz Liszt) Cosima von Bulow, Otto von Bismarck, King George V of Hanover, and "Mad King" Ludwig of Bavaria, who had created Neuschwanstein Castle. For whatever reason, she and her husband left it behind for a life in America, eventually settling in Texas. Her sculpting career continued to prosper, with her statues of Sam Houston and Stephen F. Austin on display at both the Texas State Capitol and the U.S. Capitol today, as well as a bust of Lady Macbeth now held by the Smithsonian. But the most remarkable for me is the tomb of Albert Sidney Johnston, finished two years before her death. It is the only place I can think of where you can see the Lone Star figuring into a Gothic framework. And here, whether you believe in the Gone with the Wind version of the antebellum south or not, Johnston lays, draped in the Confederate battle flag, like a knight of yore, resting from a life of battle. 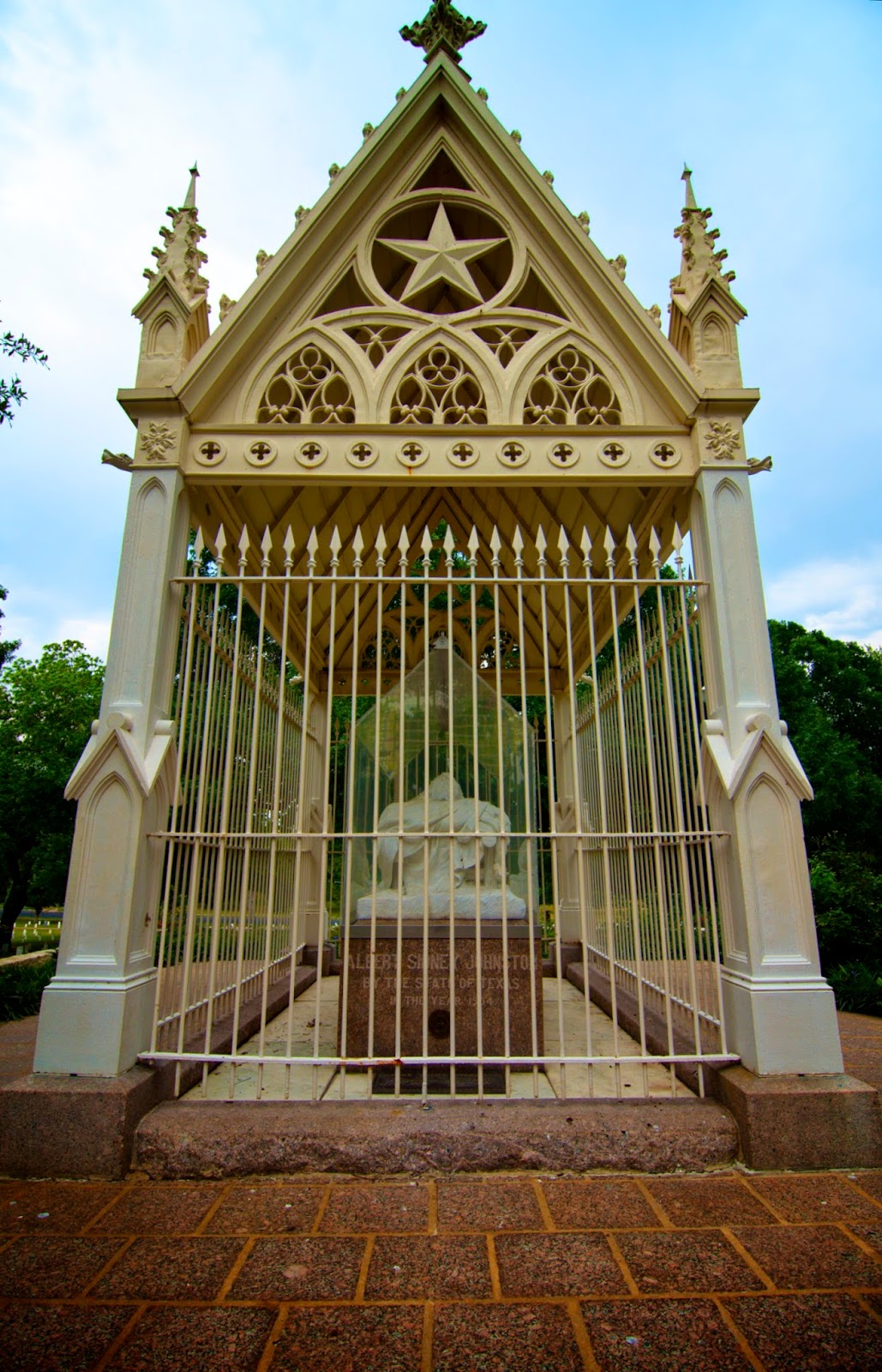 Posted by The Modern Medievalist at 1:39 PM No comments: