Praying the dry Mass: what to do in times of pestilence 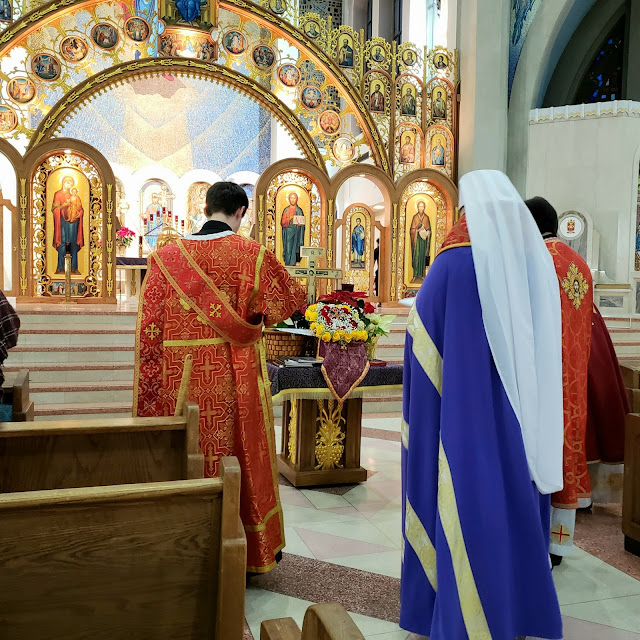 A few nights ago, I attended a Liturgy of the Presanctified at the Ukrainian Catholic cathedral in Philadelphia: one of the last public Catholic liturgies in the entire region. After the final prayers, the Metropolitan himself gave a short homily explaining his decision to order a shutdown of all public worship in his archeparchy just two hours before. He said that the pandemic is an opportunity to enter more deeply into the Great Fast. Now, it would seem God is asking us to fast from even the liturgical life of the Church. Perhaps when public worship resumes, we'll no longer take its gifts for granted! Rather, we'll be able to unite our temporary deprivations with those Christians in China, North Korea, and other parts of the world where a lack of liturgy and sacraments is simply part of their everyday lives.

Until that day comes, what do we do? The specific act of hearing Mass on Sundays may be a precept of the Church (and, therefore, adjustable by the bishops), but the larger principle of setting aside one day of the week to rest and honor God is a divine commandment. The Bishop of the Ordinariate of the Chair of St Peter, to which I belong, has carefully chosen to "commute" the Sunday obligation to alternative acts of prayer at home, rather than dispense with it altogether. Until we return to normal, he gave his flock two options:

Modern technology has given us an aid to option a: namely, that with rudimentary equipment, anyone can set up a broadcast of a private Mass for an entire community to watch from a distance. It's rather like a more advanced method of what St Charles Borromeo when the plague of 1576 ravaged his see of Milan. The archbishop ordered the shutdown of churches, but after the streets were cleared, he had altars set up at street intersections so that the people could hear Mass from their windows. This isn't an option today for those of us who don't live in dense European cities, a livestream is easy to set up and gives us visual evidence that the holy sacrifice still goes on behind closed doors, and is still efficacious even without our physical presence. Last week, I assisted my pastor with recording and singing for a simple sung votive Mass for the Sick in the Ordinariate Use--just the priest, with the aid of one server and one cantor--which may be seen on YouTube below. Additionally, starting this Sunday, we will provide livestreams of Sunday Masses using the same general format until it's safe to congregate again. The link to the first livestream, set for Laetare Sunday, is here.

Another method to help in fulfilling option a is more old-school: the use of the medieval "dry Mass" as a devotional tool. What's that, you ask? The term missa sicca--"dry Mass"--has several meanings. The most common today would be the act of practicing the motions of Mass by a deacon or seminarian studying to be ordained a priest. Another meaning is more of a historic usage: when a priest celebrates a liturgy that strongly resembles Mass, but without the offertory or consecration. In the medieval Church, priests sometimes used the dry Mass as a devotion because of the old prohibition against offering Mass in the afternoon (one which continued until the 1950's). Sometimes this would be abused. The missa venatoria ("hunter's Mass") was prayed for gentlemen in a hurry to go on the hunt. The missa nautica ("sailor's Mass"), on the other hand, was quite sensible. Missionary priests on ships to the Americas or Asia would go for months without celebrating a true Mass because of the risk of the Precious Blood spilling over during tosses and turns on the high seas.

Michael Lofton, author of the Reason & Theology blog, has cleverly adapted a form of the medieval "dry Mass", inspired by a form used by the medieval Carthusian monks, for modern family use. Click on the link below to view the .pdf file he printed, which I encourage you to print out. You'll see that you can easily add in the Scripture lessons of the day.

Click to view the "Dry Mass for the Domestic Church"


Finally, a word on option b above: the Rosary is, of course, the most revered private devotion of the western Church. Pope Pius V led its recitation during a procession in Rome to pray for victory against the Turks prior to the 1571 Battle of Lepanto. More recently, this past Thursday, Pope Francis called for the whole Church to join in the Rosary (broadcast from Rome) to pray for a swift end to the coronavirus pandemic. It's an excellent devotion, especially for Catholic families who want nothing more than straightforwardly kneeling and making earnest supplication to the mother of God.

But for those seeking more, we can pause to reflect that the Rosary is called the "Psalter of Mary" because the full recitation is traditionally 150 Aves, in imitation of the 150 Psalms of David. It's a simpler way of praying the Psalter, which--in its fullest form--is prayed through the Divine Office, also called the Liturgy of the Hours. Where this liturgy is all too often mistakenly considered simply the obligation and domain of priests, these upcoming Sundays without access to the Mass might give the lay faithful an opportunity to consider how to make the praying of the Hours a part of their home life, at least on an occasional basis.

As with the livestreaming of Mass, modern technology has made this aspect of liturgy more accessible than ever. Rather than buying expensive books and having to learn how to mark and turn the pages, apps like iBreviary do all the work for you. There are even choices in which form of the Office to use beyond just that of the reformed Roman Rite. For instance, Divinum Officium offers several iterations of the pre-conciliar Roman Office in Latin and various translations. Or for those who enjoy Morning and Evening Prayer in the Anglican tradition, John Covert has a website set up to easily pray that form of the Office as well. It is used by many members of the Ordinariates.

In the coming days, I believe things will get worse before they get better. I hope the above information at least serves as a useful guide for alternative methods of worship on Sunday. Until then, you can be assured that the Modern Medievalist is as busy as ever, helping set up livestreams at various churches or assisting as part of the "skeleton crew" for these liturgies in the absence of the usual ministers. Stay strong, pray for me, and look out for one another!
An Act of Spiritual Communion (as given in the St Gregory's Prayer Book)
"In Union, dear Lord, with the faithful at every altar of thy Church where thy blessed Body and Blood are being offered to the Father, I desire to offer thee praise and thanksgiving. I believe thou art truly present in the Most Holy Sacrament. And since I cannot now receive thee sacramentally, I beseech thee to come spiritually into my heart. I unite myself unto thee, and embrace thee with all the affections of my soul. Let me never be separated from thee. Let me live and die in thy love. Amen."

The Prayer of Humble Access (said before Communion in the Ordinariate liturgy and BCP)
"We do not presume to come to this thy Table, O merciful Lord, trusting in our own righteousness, but in thy manifold and great mercies. We are not worthy so much as to gather up the crumbs under thy Table. But thou art the same Lord whose property is always to have mercy. Grant us therefore, gracious Lord, so to eat the flesh of thy dear Son Jesus Christ, and to drink his blood, that our sinful bodies may be made clean by his body, and our souls washed through his most precious blood, and that we may evermore dwell in him, and he in us. Amen."

Anima Christi (by St Ignatius of Loyola)
"Soul of Christ, sanctify me. Body of Christ, save me. Blood of Christ, inebriate me. Water from the side of Christ, wash me. Passion of Christ, strengthen me. O good Jesus, hear me. Within Thy wounds hide me. Separated from Thee let me never be. From the malignant enemy, defend me. At the hour of death, call me. And close to Thee bid me. That with Thy saints I may be Praising Thee, forever and ever. Amen."