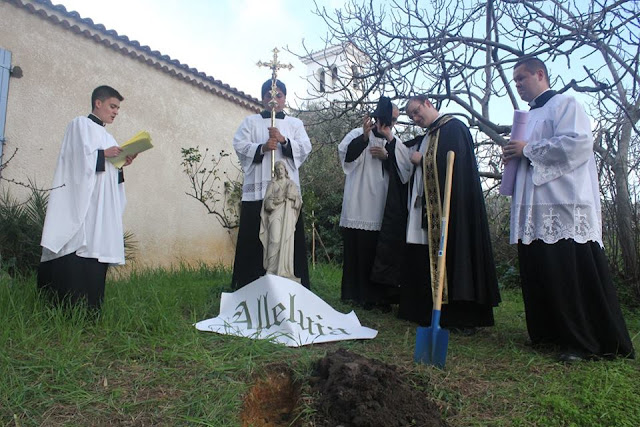 For reasons beyond my understanding, there's been a significant uptick of interest this year in the curious (and commendable) ceremony of the depositio: the "burying of the Alleluia". In those places which observe pre-Lent (such as traditional Latin Mass communities and, now, the "Anglican" Ordinariates), the hallowed word "alleluia" disappears from the liturgy from Septuagesima Sunday until its glorious return at the vigil of Easter. In the post-Vatican II calendar, this is carried over to Fat Tuesday.

The word "alleluia" is, of course, derived from the Hebrew expression in the Old Testament, meaning "praise Yah(weh)!" Outside of Lent and Advent, we sing this before the Gospel reading at Mass. During the Easter season, we go above and beyond by ending all sorts of antiphons with a double-alleluia. However, during the penitential seasons of Advent and Lent, we temporarily set this word aside to give a sense of restraint. Pope Alexander II (the same pope who gave William the Conqueror his blessing for an invasion of England) ordered a simple rite of dismissal for the Alleluia in Rome. The end of First Vespers on the evening before Septuagesima was punctuated with two final alleluias as though to get it fully out of one's system before the great season of penance was to begin. But in the northern countries, these rites grew to ever-more-splendid lengths of ceremonial. In an article from 2010 on the New Liturgical Movement, Matthew Alderman writes:

"Special antiphons marked this event in some places, as well as the singing of the hymn Alleluia, Dulce Carmen. At Auxerre twenty-eight separate Alleluias were troped into the mass text. A procession, with the word Alleluia inscribed on a banner or plaque, might be conducted round the church, with the Alleluia inscription solemnly entombed at the end, the plaque sometimes having the shape of a coffin. In some parts of France, the Alleluia might even be burned in effigy in the churchyard!"

He goes on to remark that the rites were typically done by choirboys, rather like the old enthroning of the boy bishop--which made me think of how jovial, almost child-like the ceremony can be, and what power it has to captivate the imagination of a young student at a Catholic grade school where it's performed, such as the school attached to my former parish: the Atonement Academy. My old pastor described the effect that this custom had in an old blog post:

"The students in our parish school get ready for this every year, and take it very seriously.  In fact, a few years ago just after Lent had begun, one of our very young students asked if he could see me because he had to tell me something “very, very important.”  When he came to me, he wanted to tell me what one of the other boys had done earlier that day.  It sounded serious, so I encouraged him to tell me about it. In a half-whispered voice the offence was reported: "He said the 'A' word!""

A friend recently asked me if I could furnish him a rite for burying the Alleluia so his own community could use it this weekend, so I sent him the one used by Atonement. It goes:

May the good angel of the Lord accompany thee, Alleluia, and give thee a good journey, that thou mayst come back to us in joy, Alleluia.

May Alleluia, that sacred and joyful word, resound to God's praise from the lips of all people.

May this word, which expresses glory as chanted by the choirs of angels, be sweet as sung by the voices of believers.

And may that which noiselessly gleams in the citizens of heaven, yield fruit in our hearts by ever growing love.

May the Lord's good angel go with thee, Alleluia ; and prepare all good things for thy journey. And again come back to us with joy, Alleluia.

Let us pray. O Lord, we beseech thee favourably to hear the prayers of thy people; that we, who are justly punished for our offences, may be mercifully delivered by thy goodness, for the glory of thy Name; through Jesus Christ our Saviour, who liveth and reigneth with thee and the Holy Ghost ever, one God, world without end. Amen.

There are, I'm sure, many other worthy variations out there! Rites like this could even be adapted for use in the domestic Church. If you have one, feel free to share it as a comment so I have more ideas for when my children are old enough.