In part I, we explored young Thomas Becket's origins in London up to his appointment in Theobald, Archbishop of Canterbury's household staff as a clerk. Now we'll look at his first ventures into the world of royal and ecclesiastical politics. 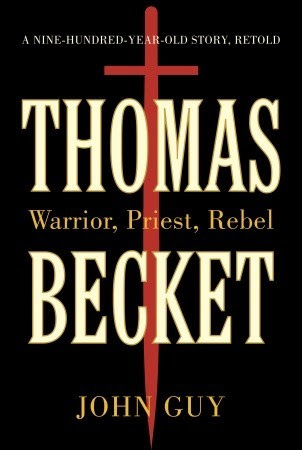 The first order of business was orders. Thomas, like any man or boy put to the service of the Church at virtually every level, was ordained to one of the four minor orders, so literally, a "clerk". He was likely a lector or acolyte and served in that capacity in the liturgy, and was expected to maintain a tonsure (that is, to shave the upper part of the head as a sign of humility before God), but was not bound to any religious vows or promise of celibacy. Theobald enhanced Thomas's on-the-job training by hiring a tutor in Roman and canon law. Soon enough, Thomas showed promise in the archbishop's court and and was sent to the University of Bologna (the world's oldest university as we know it) for a year to advance his study of law. He threw himself wholeheartedly into his work now, driven by a newfound ambition to make a place for himself in this world, particularly by gaining the archbishop's confidence. This he did, when in 1149 or 1150, Theobald sent Thomas to Rome to secure the title of "papal legate to England" for Canterbury. The position was previously given to Henry of Blois, bishop of Winchester and, much to Theobald's consternation, younger brother of King Stephen. Thus, the king's brother held the highest precedence in the English church and frequently hampered Theobald's attempts to enforce the Pope's will. Fortunately, Pope Eugenius had the sense to put an expiration date on Henry's authority as legate. When the time came, despite the fact that Henry raced to Rome himself to seek a renewal, Thomas convinced the Pope to pass his authority on to Theobald instead. Soon after, the archbishop sent Thomas back to Rome with a mission of even greater importance. Stephen was counting on his brother to secure the succession and crown his son, Eustace. But with Theobald now papal legate as well as archbishop of Canterbury, Theobald held an unimpeachable claim over the coronation rite. Thomas's task was to convince Eugenius to issue a formal decree banning anyone from placing a crown on Eustace's head. This he achieved, eroding Stephen's hold over the realm, bolstering the archbishop's, and establishing Thomas as Theobald's right hand in all affairs.

By 1153, the house of Stephen was crumbling at the foundations. The hated Eustace died of a heart attack while plundering the lands of Bury St Edmunds Abbey (it's said that the monks of Bury rejoiced at Eustace's timely demise). With the future of England uncertain after Stephen's inevitable passing, even his brother, Bishop Henry, eventually saw the light and threw in with Canterbury, regretting his earlier role in aiding Stephen's usurpation. Between an old and broken king on the one hand and a young prince across the channel without the army to take his birthright by force, the realm turned to the archbishop of Canterbury to mediate a truce. Theobald, meanwhile, turned to Thomas Becket, "my first and only counselor". The ensuing six months were as precarious as walking a tightrope under the jaws of two lions, but at last, Theobald and Thomas hammered out the royal rivals' differences in the Treaty of Westminster. Stephen agreed to forbid Eustace's younger brother, William, from taking the throne. In William's place, Stephen adopted Empress Matilda's son, Henry of Anjou, as his own "son and heir" in ceremony, with all the bishops swearing fealty to him in all "saving only the fealty which they owed to the king for as long as he lived". All castles and lands taken during the war would be returned to their original owners on pain of excommunication and interdict. The Anarchy was over.

For Thomas's indispensable service, he was given the archdeaconry of Canterbury. That office's revenues, in addition to sinecures (parish incomes given to absentee officials instead of vicars with actual care of souls) he already received as one of Theobald's favored clerks, meant that Thomas earned more than £100 a year by Guy's estimate; even more than the previous archdeacon, Roger of Pont L'Évêque, now promoted to archbishop of York. The archdeaconry, of course, required Thomas to advance to major orders and forswear marriage and bearing of arms; minor inconveniences in the face of such rich rewards. But even these accomplishments would pale before what was to follow, for within a year of the Treaty, Stephen would die of a bloody flux and the twenty-one year old Henry would assume the throne and impose a new order upon his kingdom.

Part III will cover Thomas's eight year tenure as chancellor of England.
Posted by The Modern Medievalist at 4:44 PM