Quasimodo Sunday and the eyes of Notre-Dame 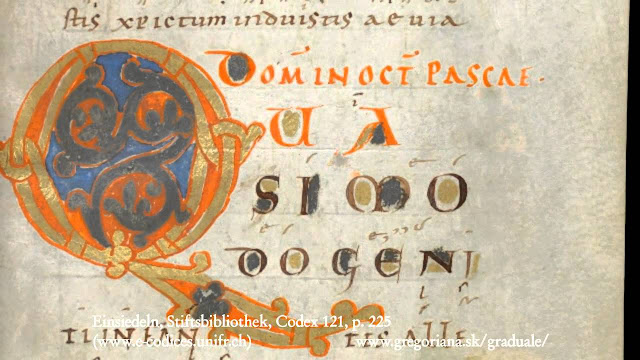 I have a semi-frequently observed tradition of watching Disney's The Hunchback of Notre Dame every year on the first Sunday after Easter (also called Low Sunday, the second Sunday of Easter, the Octave Day of Easter, Dominica in albis, etc., etc.). What on earth does Easter have to do with a Disney cartoon, you may ask? The answer lies in the traditional Introit chant for this day, also called Quasimodo Sunday:

Today's header picture, featuring the text of today's Introit in a finely illuminated form on a manuscript, was taken from the video recording below.

That incipit, a compound of the Latin quasi and modo, has been reduced to as mere "as" in the English translation; but a more literal take might be "as if, in a way" or "almost the standard of measure". Thus, in Victor Hugo's 1831 novel Notre-Dame de Paris ("The Hunchback of Notre Dame"), when Claude Frollo discovers a misshapen baby abandoned on the steps of the cathedral, he bestows the name Quasimodo with a twofold meaning: first for having been found on the Sunday after Easter, but also for appearing "as if, in a way", a human being...

The opening sequence of the Disney version, like the rest of the film, is so different from the book that there's barely any resemblance, but that in no way stops it from being a masterpiece of song and animation. In the movie, Frollo is not the archdeacon but a secular magistrate, while the archdeacon is made into a separate, more benevolent character. This Frollo slays a Gypsy woman on the steps of the cathedral in pursuit and is about to toss her baby into a nearby well until:

"for one time in his life of power and control,
Frollo felt a twinge of fear for his immortal soul."

When Hugo wrote the novel, his readers, unless they were very old, had to imagine what the "eyes of Notre Dame" looked like because most of the statues had been destroyed by the plebeian vandals of the French Revolution. Indeed, this was precisely the reason the book was written in the first place: to bring a sense of cultural awareness to Notre-Dame's value at a time when the civil authorities were thinking of having the grand old (disrepaired) edifice torn down entirely. The statues we see resting on the western facade today are, thanks in part to Hugo's efforts, restorations made by Viollet-le-Duc, the famed restorer of the Sainte-Chapelle. 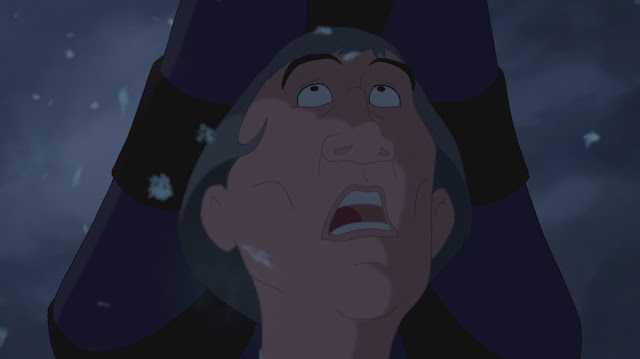 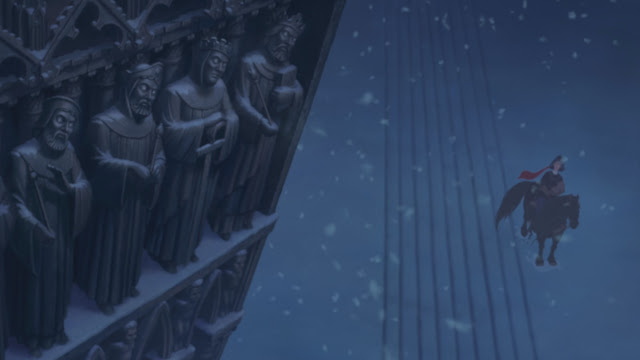 And, of course, you owe this post a viewing of the film's opening sequence, if you've never seen it before....

Posted by The Modern Medievalist at 7:43 AM