"Your Humble and Obedient Servant": the ars dictaminis 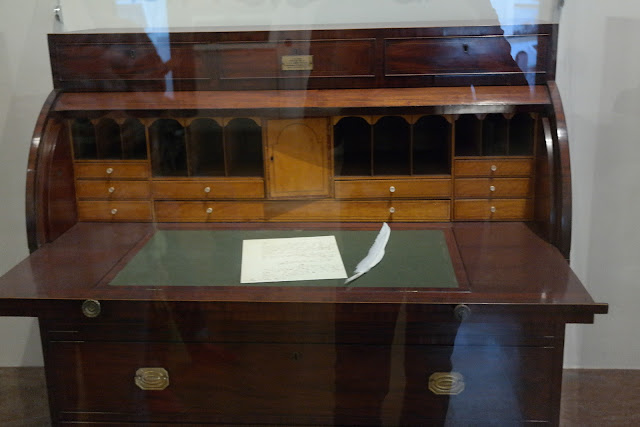 Earlier this week, I was a guest at the 23rd Street Armory for dinner amidst the company of the First Troop Philadelphia City Cavalry: the oldest United States military unit in unbroken service, going back to 1774 and still fulfilling its role as a mounted cavalry company as recently as this past January's presidential inaugural parade in Washington, DC. They asked to fill out a form letter stating my interest in being presented for membership; for unlike other units of our armed forces today, membership in the Troop is by election of the members on the rolls. Even the selection of officers is, recognized by US law as ancient and honorable privilege going back to the colonial era, by election from amongst the enlisted ranks.

The end of the form letter is printed with a valediction which has not been used in military correspondence since, probably, the 1950's and now seems thoroughly antiquated:

"I am, Sirs,
Your most Obedient Servant,"

I paused, smiled, and affixed my signature underneath. In that moment of reflection, my mind went back to my visit last November to the New York Historical Society in Manhattan. Among several artifacts on display there was a writing desk, pictured above, belonging to the city's famous Founding Son by adoption, Alexander Hamilton. That secretary, upon which many (hundreds? thousands?) nation-changing letters must have been scribbled by, stares back accusingly at me whenever I go more than a month without writing a post. Sitting at the desk's edge, there's a reproduction of a letter which was likely penned on that surface. It's one of the many heated letters between Hamilton and Aaron Burr which escalated into the infamous duel. This one reads:

Your first letter, in a style too peremptory, made a demand, in my opinion, unprecedented and unwarrantable. My answer, pointing out the embarrassment, gave you an opportunity to take a less exceptionable course. You have not chosen to do it, but by your last letter, received this day, containing expressions indecorous and improper, you have increased the difficulties to explanation, intrinsically incident to the nature of your application.
If by a “definite reply” you mean the direct avowal or disavowal required in your first letter, I have no other answer to give than that which has already been given. If you mean any thing different admitting of greater latitude, it is requisite you should explain.

I have the honor to be   Sir   Your obed servt.
A Hamilton

Today, we find it tickling, if not pretentious and wholly insincere, to label oneself "your obedient servant" to a mortal enemy. This valediction was especially popular during the American Civil War, even in letters between opposing generals demanding the unconditional surrender of the other. And yet, these closings were but brusque, vestigial remains of the truly purple prose of former ages. Compare this to the close of a letter from the 16th century to the Holy Roman Emperor, Charles V:

Or even this complete valediction for a letter to a cardinal which was still in common usage into the 20th century:

"Be pleased to accept the homage of profound respect with which I have the honor to offer you as,
The humble and dedicated servant of Your Eminence,"

Such an ending makes "Your obed servt" seem curt by contrast! From the end of the Civil War to the present, salutations and valedictions have been clipped and trimmed again and again. "Your faithful and obedient servant" became "Yours faithfully, &tc", then "Your faithfully", then just "Yours". "Dear worshipful master" became "Dear Sir", then "Dear". Today, even "Dear" is beginning to seem antiquated!

The men and women of past ages would fall back on these conventions in their correspondence, regardless of their actual sentiments or familiarity with the person being addressed, because it was the product of a tradition centuries in the making. The western world's ars dictaminis, the art of written composition, was established by the institutional Church of the Middle Ages, particularly by the archdeacons and other chancery officials tasked with the business of preparing letters for the bishops. It was these men; clerks; who filled that void left in western Europe by the collapse of the ancient Roman bureaucracy. (And which, incidentally, I keep alive in my current occupation as a clerk in a Church institution. The drafting of legal military correspondence was also a large part of my job as an Army paralegal.)

When men of the warrior classes finally took it upon themselves to study the art of letters; perhaps inspired by the example of Charlemagne who made efforts late in his life to learn rhetoric at the hand of the Anglo-Saxon monk Alcuin; they learned these skills from the ecclesiastics and undoubtedly copied their formulaic methods. The rhetoricians of the 10th century onward standardized but one way of composing a letter to the Pope, one way to write to a cardinal, one way to write to a bishop not a cardinal, and on down the line.

Into the Commercial Revolution, merchants of Florence, Venice, and Bruges found the art of letters eminently useful in petitioning for a loan or collecting a debt. These generations refined the business letter to something like what we're now familiar with today:


[Boilerplate salutation according to social status]
[Warm and fuzzy expressions of regard, however insincere]
[Paragraph that gets to the point of the letter]
[Well wishes until we meet again, or at least until demands are satisfied]
[Boilerplate valediction]
[Signature]

There are still people alive in France today who can remember using such florid but standard closures as,

By the 18th century in the American colonies, middle-class sensibilities pared these down into a small handful of variations. "Your obedient servant" had a two-fold meaning. For a social inferior or subordinate officer in the military, it was a true sign of deference. For an equal, a gesture of friendship. For a social superior, even someone like George Washington, to convey himself to a man of lower rank was a form of gracious condescension which is too easily dismissed in our times as "patronizing". Ironically, the only class of people who were unlikely to ever close a letter with "Your obedient servant" were slaves or poor working-class whites. Chances were low that they could write to begin with, but even if they could, to address themselves as "servant" would have been considered to be stating the obvious.

All this thinking about correspondence has reinvigorated my on-again, off-again interest in old-fashioned letter writing (outside of work). Alas, since I never much developed my cursive, I have to stick with typed letters on stationery.

Until next time, I remain, as ever,
The Modern Medievalist


PS. Just for fun, there's a song along this theme....
Posted by The Modern Medievalist at 2:40 PM