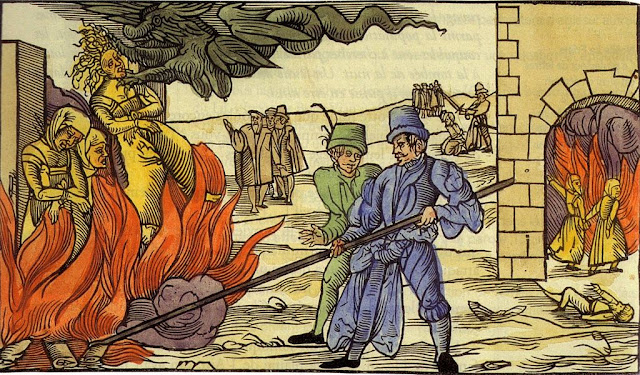 I'm still working on the next post in my latest series, but some friends have asked about my thoughts on current events like the violence in Charlottesville. Here's my current train which I pose to you not as a full-fledged article, but a musing in the company of friends. Let's hope I'm far more pessimistic than the situation actually warrants....

If there's an upside to the recent tensions, it would be that my leftist friends can now fully understand the medievals' abhorrence of heresy. In those days, heresy was never considered a set of private beliefs which could be held and practiced without disturbing the peace. Unlike simply being born into a minority religion like Judaism, or even just being a witch (contrary to popular belief, the vast majority of medieval inquisitors didn't think folk magicians were worth their time) converting to a Christian offshoot like Albigensianism or Lollardy was considered, with good reason, an attack on the seven sacraments and, therefore, the entire fabric upon which medieval Christendom was built. If we suppose, for the sake of argument, that the sacraments are indeed necessary for salvation, then anyone who seeks to abolish or destroy the path to eternal life must be infinitely worse than any mere foreign invader or unjust lord. The latter might take away your goods or even your earthly life--but heretics would take your immortal soul. Albigensians, Lollards, Hussites, et al were reckoned as the hate groups of their day. If they could not be converted by preaching and learned discourse, then they had to be purged by fire; cut away from the body of Christ and the civil fabric like a surgeon would cut away a cancerous limb before it overtook the whole system.

If America is a religion, then neo-Nazism is certainly a heresy. It's why antifa postings, whether or not they believe in souls, consistently adopt the language of a struggle for the soul of America. Perhaps, when the soul of America is at stake, the normal rules of civil discourse established by our "Enlightenment" forebears no longer apply. Did some of these philosophers, in denying original sin as a fable, make men more like angels than they really were? Are freedom of speech, freedom to bear arms, and voting actually protections against tyranny, or do they merely ensure a tyranny of the majority?

No, I don't really believe that.... but I can see why some would, and why, as it was for Rome, authoritarianism is the next logical step in the course of our civilization. There had to be a civil war back then because Octavian didn't have the advantage of Netflix. This time, there will be no battle of Actium--or if there is, it'll just play out between a few key players on our television screens. Who will you root for: an Alaric the Goth, who will righteously avenge the blood of his tribe by sacking the eternal city and all her idols? Or a new Augustus, who will keep the appearances of the old republic alive but rule as a strongman and remold the state in his image by degrees? There is, regretfully, no Charlemagne in this scenario.

By the way, neo-Nazism is certainly not the only "heresy" that will be extinguished in the aftermath of the new regime. That's simply the lowest-hanging fruit of many more, subtler and more socially acceptable evils which future generations will judge us for.
Posted by The Modern Medievalist at 11:26 AM