Am I really saying that DC Comics are worth teaching in school or held on par as classical literature? No, of course not. But it's perfectly legitimate to accept that stories grow up with their tellers. They evolve over the generations until they become something else entirely. Even retelling the same story over and over again with slight variations--such as, for example, the murder of Bruce Wayne's parents (1989 in Batman, 1995 in Batman Forever, 2005 in Batman Begins, 2016 in Batman v Superman, 2019 in Joker)--isn't necessarily a bad thing as long as each version speaks effectively to another audience. I've said before on this blog that medieval storytellers would have been confused by modern critics' preoccupation with "original stories". For them, "original" (if they ever really used that word at all, as we think of it) was more literal: getting back to the origin--that is, the heart--of an idea. It's why they enjoyed telling the stories of King Arthur and the Knights of the Round Table over and over again, changing things here or there, adding a twist or two, and openly ripping other storytellers' ideas without attribution. Each telling brought a few more "fans" into the mythos until Geoffrey of Monmouth's Historia Regum Britanniae, which told of Britain's founding by the Trojans and King Lear dividing the realm among his three daughters as matters of real history, exported the legend of Arthur everywhere across the European continent. Chrétien de Troyes added Lancelot to appeal to French audiences, but now we can hardly imagine the Round Table without him.

The most definitive of all Arthurian works was a compilation by Sir Thomas Malory: Le Morte d'Arthur, one of the first books ever printed by Caxton's press in England. It was the first major work of fictional prose in the English language. I introduced this book at the beginning of this article as a darker take--at least in some ways--on familiar stories. In Malory's world, even the noblest knights are not spared from ambition, treachery, and doom. After all, Arthur's fate is spoiled in the very title... and why I thought, from a medieval point of view, mentioning the fact that Superman dies at the end of Batman v Superman isn't much of a spoiler. (Indeed, that plot point was based the comic book arc "The Death of Superman" from 1993. The ending was given in the title specifically to stir up comics sales.) This bleaker outlook isn't too surprising when considering the author. Sir Thomas Malory was a warrior and parliamentarian who fought on both sides of the tumultuous Wars of the Roses. He played the game of thrones, switching his allegiance from York to a pact with Warwick the Kingmaker to oust Edward IV. Aside from conspiracy to treason, Malory's extensive rap sheet included highway robbery, breaking and entering, and even "rape" (which at the time may have been consensual adultery). It was during his time in prison that he wrote Le Morte d'Arthur. It was not printed until 1485, about 14 years after Malory's death. The book enjoyed several reprints until Cromwell and the Puritans held England hostage to a decade of dourness. From there, Le Morte d'Arthur languished in obscurity until the Romantic and Medievalist revivals of the 19th century. We have Malory to thank as the primary inspiration for Tennyson's Idylls of the King and, into the 20th century, T.H. White's The Once and Future King.
This brings us back full circle to the most faithful adaptation of Le Morte d'Arthur on film, as proclaimed on the movie posters themselves: John Boorman's Excalibur. It opens with the retelling of Book I--how Arthur was conceived--in graphic detail. King Uther Pendragon lusts after the Duke of Cornwall's wife, Igrayne, and begs for a sorceror's aid. Merlin casts a spell to allow Uther to enter Igrayne's bedchamber in the likeness of her husband, but in return, Uther must give up the child that results from this unnatural union. So begins an attempt to capture the epic scope of Malory's book, the  entire life of King Arthur, over a paltry 2 hours and 20 minutes. Nigel Terry plays as Arthur in all stages of his adult life, from when he first draws the sword from the stone to when he sails away for Avalon, weathered by age and the trauma of having to kill his own son born from incest. Throw in a bunch of gritty battles with awkward grunting and other sound effects, Guinevere's adultery with Lancelot, a crow gouging an eye out from a corpse, a final battle against Mordred with Carl Orff's "Carmina Burana" roaring in the background, and this overarching theme of how the arrival of Christianity and Camelot gradually sever man's connection to nature and magic, and you have Excalibur. Whatever John Boorman was trying to do with this movie, it certainly wasn't for parents to keep their kids entertained for a couple hours so they could do some shopping in peace.
I honestly don't count Excalibur among my own all-time favorites, but I appreciate what it tried to do: re-adapt and elevate the Arthurian mythos into an epic for modern times. It kicked off an entire decade of sword-and-sorcery movies ranging from Conan the Barbarian to Legend, Ladyhawke, and The Princess Bride... but none of these stand out as bold and weird as Merlin, with a chrome plate for hair, saying with utmost seriousness for the camera, "The days of our kind are numberèd. The one God comes to drive out the many gods. The spirits of wood and stream grow silent. It's the way of things. Yes... it's a time for men, and their ways."

The Round Table, reborn 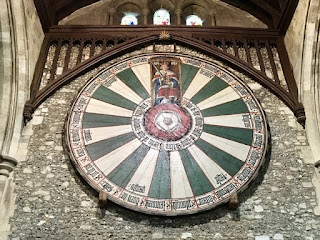