The Splendor of the Painted Church 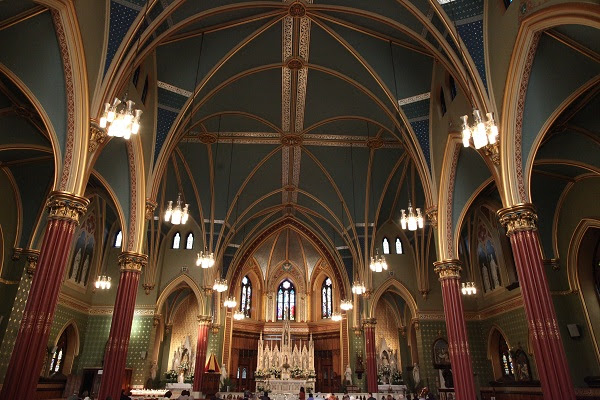 As I was browsing the wide web of (dis-)information today, I happened across some photos of a recent church restoration on a Connecticut Latin Mass society's blog. The Basilica of Saint John in Stamford, Connecticut, a late Victorian parish church in the Gothic revival style, had suffered from that all-too-common bout of whitewashing that church vandals in pointy hats imposed upon their flocks around the time of Vatican II. In this case, the wall murals in the sanctuary had actually been painted over in white a few years before the Council. After their pastor decided to peel away the 21 coats of whitewash and restore the murals a few years ago, the church went beyond that and coated the whole interior in an array of rich color; a project which finally finished this past April. In an article from the Stamford Advocate, the pastor, Monsignor Stephen DiGiovanni, was quoted saying, “It was looking like a bowl of vanilla ice cream. Now it looks magnificent.” For my own part, I couldn’t agree more.

In fact, I actually loathe the look of whitewashed church interiors. Here I should explain before some scandalized soul out there accuses me of hating the purity that brilliant white represents. You see, nothing screams the iconoclastic vitriol of the Protestant reformers who scoured the frescoes which adorned the churches of their medieval forbears, or the frighteningly bad taste of the Rococo designers with their temples modeled after wedding-cake palaces, quite like an all-white church. It’s one thing for a Gothic church to embrace the simplicity of bare, grey stonework, as many of the ancient cathedrals now stand today. But the “purity” of our modern stuccoed abominations, as Pugin would say, is more likely a flimsy excuse for a darker reality: that the designers lacked the talent or imagination to do anything else.

Nearly every church in medieval England, from the cathedral to the humble parish, was adorned with beautiful wall paintings. These images, like the statues and stained-glass windows that accompanied them, served to tell the stories of the Holy Gospels and the saints to a people who couldn’t read. The colors brought vibrancy to a harsh world that was regularly beset by disease, famine, and war. Master painters were aided in their work by the entire community of the faithful. Some painters were even women. Painted church interiors had been a part of the medieval English parish tradition for five hundred years; in other words, as long as there were stone churches in England at all. There are surviving fragments of wall paintings on the Continent that are even older.

All this changed with the arrival of the Reformation. Henry VIII’s reforms were relatively modest. He “only” ordered the destruction of saints’ reliquaries, such as the famous shrine of Saint Thomas Becket in Canterbury. With the accession of his heir, the boy king Edward VI, his radical Protestant advisors could begin the war on imagery and color itself in earnest. By the end of his short reign, nearly every church in the country had their walls whitewashed or even sometimes torn out. English glassmakers actually forgot how to make stained-glass until the Gothic revival in the 19th century.

The Catholic world regrettably followed suit. On the Continent, even Catholic rulers viewed their Gothic churches not as treasures from a venerable era, but garish vestiges of medieval barbarism. For instance, in the later 1600’s, Louis XIV oversaw the whitewashing of Notre-Dame de Paris. A few centuries of paintings, tombs, and statues were a small price to pay for bringing one of the great Gothic cathedrals of medieval France “up with the times”, so they thought. Even the vast majority of the stained-glass windows were removed. Thankfully, the Gothicist Viollet-le-Duc amended the windows during his twenty years of restoration work in the 19th century, but the walls remain a uniform shade of drab grey to this day. The very fact that so many Gothic cathedrals remain colorless, whether by the ravages of time or vandalism, has probably been part of the reason why modern churches built in the Gothic style usually have plain white walls.

It’s easy to despair and assume that there are simply no contemporary artists with the talent and training to create larger-than-life wall frescoes and mosaics for our undecorated churches. The assumption is both false and deadly, and has probably has led to many a classical artist surrender and take up a “real job” due to lack of demand for their skills. I’d like to assemble a directory of artists trained in medieval-style iconography, but even then, many churches won’t be able to afford their expertise. In the meantime, a simple application of color, and perhaps some geometric decorations, can still bring the drama of the medieval imagination to your neighborhood parish.

The first example that comes to mind is the very church where I was baptized, Our Lady of the Atonement in San Antonio, Texas. To see it today, it’s hard to believe the walls and ceiling were originally white. That was long before I ever visited it, so I’ve only seen the original white scheme in pictures. But since then, the interior has been painted in a spectacular arrangement of red, blue, and gold, recalling such fantastic schemes as the Sainte-Chappelle in Paris (also thanks to the restorative work of Viollet-le-Duc). It’s very fitting that such a church’s painting scheme, combined with its rood screen, recalls the majesty of the pre-Reformation world, since Atonement was one of the first “Anglican Use” churches in America; that is to say, one of the first communities specially created for former Anglicans and Episcopalians to reconcile with Rome.

Objection 1.) “I’d like to introduce a new painting scheme to my church, but the rich old trustees won’t go for it. It’s simply too radical.” If a wholesale repainting of the church is too daunting or too shocking for an old congregation stubbornly set in their ways, one alternative is to experiment with only a small section. There’s a fine instance in the apse of Saint Mary Cathedral in Austin, Texas. This Gothic revival church has white walls in the nave, but the space around the high altar is set apart with a distinctive wallpaper pattern along the walls and is topped with a stunning blue ceiling studded with stars, making it clear that the high altar is the axle where heaven and earth are conjoined. 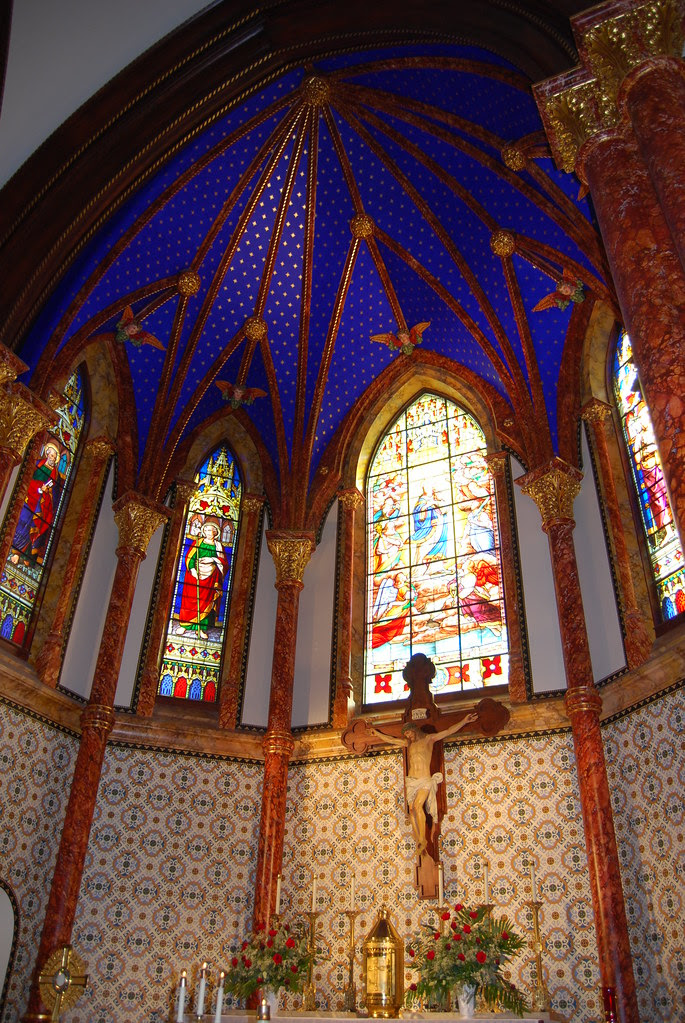 Objection 2.) “Your examples so far, while splendid, are quite dark and brooding. They would turn off newcomers to our church by appearing too foreign and cultish.” I’m still unconvinced of this argument’s validity, but it gives me the opportunity to mention another Texas treasure. If you go out to the small towns settled by 19th-century German, Czech, and other European immigrants, you’ll be able to see quite a few Victorian churches painted in bright colors reminiscent of Easter eggs. It’s a unique synthesis of the Gothic revival and ingrained Rococo sensibilities. As with Saint John’s in Stamford, the 1950’s struck and some of these painted churches received a whitewashing in the name of modernization, then were subsequently restored.

I'll close with a few links and more photos of painted churches. Next up: painted exteriors!

A review of Medieval Wall Paintings of England and Wales.

Stories in Stone: The Medieval Paintings of Breage Church.

On Texas churches: Painted churches a glimpse of history.

Posted by The Modern Medievalist at 12:54 PM