I've joked before about how the New Liturgical Movement site should declare itself defunct and go into archive mode until the next pontificate, but they did recently post a small gem in the midst of all the recent darkness: some photos of a Requiem low Mass at the shrine of Saint Edward the Confessor in Westminster Abbey. Strange how it's easier to get celebrate a traditional-rite Mass in a church owned by an Anglican/Protestant sect than it is to celebrate one in many actual Roman Catholic sites... 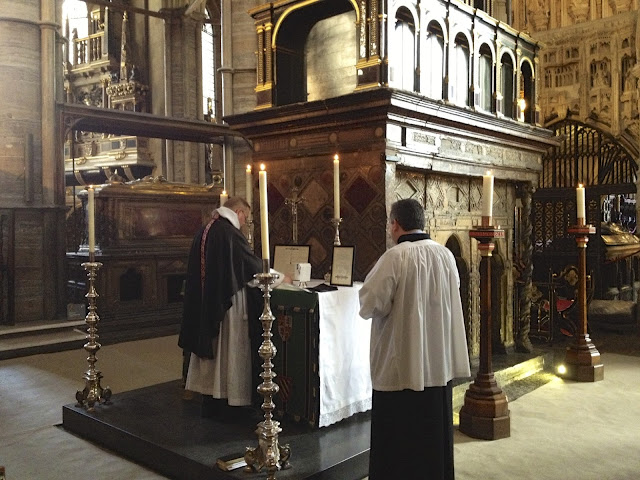 Today, Edward the Confessor is an obscure saint whose following is probably limited to a handful of eccentric Anglo-Catholics who revel in the Englishness of it all (if you want to create an awkward series of stutters, ask one to name three things Edward actually did in his lifetime). But before the royal wedding bonanzas, before the Abbey was packed to capacity with the corpses of famous dead Englishmen, and before the Crusades imported a Greek martyr named George as the realm's new patron saint, the Abbey's claim to fame was in housing the earthly remains of the penultimate Saxon king (as you see in the image above). After all, that was why Edward had it built in the first place.

In truth, Edward was never a popular saint outside of the realm's aristocratic circles. He was, in some ways, the opposite of Thomas Becket: a man of relatively humble origin who defied a king, paid the price in blood, whose cult among the masses grew overnight and was canonized in only three years. Edward died peacefully in his bed after a mostly uneventful reign. His true legacy began in the Abbey, the year after his death, when William of Normandy (called "the Bastard" in his day but known as "the Conqueror" by history) vanquished Harold Godwinson's forces and was crowned in the Abbey before Edward's remains. William was a foreigner ruling over a disaffected Saxon land, so to win his subjects' hearts and minds, he needed a symbol of unity. He capitalized on the suggestions that Edward was a Normanophile: he did, after all, build the Abbey in the Norman Romanesque style, the first of its kind to be seen in all of England. This was supplemented by the rumors that Edward relied on the advice of Norman courtiers and favorites, such as Robert, archbishop of Canterbury. And of course, the greatest rumor of all was that Edward had pledged the throne to William. We will probably never know the truth.

Edward's path to canonization was fraught by lack of claims to his sanctity and lackluster support by the commons and even the clergy. At last, nearly a century later, King Henry II could call in a favor after he helped secure Pope Alexander III's claim to the chair of Peter (which was precarious after the conclave of 1159). The thankful pontiff granted the English church's request, and Edward was canonized with the title of "the Confessor" in 1161.

The first king to truly have a devotion to Edward the Confessor was Henry III. Perhaps he looked to Saint Edward as a father figure because Henry had to assume the throne at only nine years old; and even before then, his father King John wasn't much to speak of. It was Henry III who had the Abbey rebuilt in the Gothic style we know and love today, and revamped the saint's shrine to how it appears now. He also took to wearing plain clothing as Edward was thought to have done, had a mural of the saint painted in his bedroom, and even named his first son Edward (unusual at that time, as Edward was a Saxon name. That son was the same to be called "Longshanks" and immortalized in a certain Mel Gibson film later in history.)

Now, I told you about Henry III because he was the first king (besides Edward the Confessor, obviously) to be buried in Westminster Abbey, in 1272. Before then, the Norman kings generally followed one of two paths: if they died nobly, they were buried in splendor somewhere in Norman-occupied France. If they died in disgrace (or, say, in a hunting accident like William II), they were hastily tossed in the nearest abbey crypt to whatever English hellhole they were unlucky enough to croak in. Henry was the first to be buried anywhere near the capital, and probably the first to actually want to be buried anywhere in England. Therefore, it was he who created the legacy of Westminster Abbey as the burial hall of kings.


A few of the royal tombs


When I visited the Abbey, I had the pleasure of walking through the church with an audioguide narrated by Jeremy Irons; the only time I had ever preferred the audioguide to a real person. Reader, you'll have to make do with photos I've found on the Internet.

Though my namesake put up several marvelous monuments for his predecessors, people actually forgot where James himself was buried for a couple centuries. 19th century historians dug up several of the graves, including Mary's, until they finally found him in the vault under Henry VII's tomb.

The last king to be buried was George II in 1760. After that, the Abbey caretakers apparently decided enough was enough. Successive kings have usually been around in or around Saint George's Chapel, Windsor Castle.


A few other famous personages

And finally, no tour would be complete without the Tomb of the Unknown Warrior. Simple, but the inscription touched me most of all.

Posted by The Modern Medievalist at 5:37 PM