A reader asks: how can I start a Vespers group? 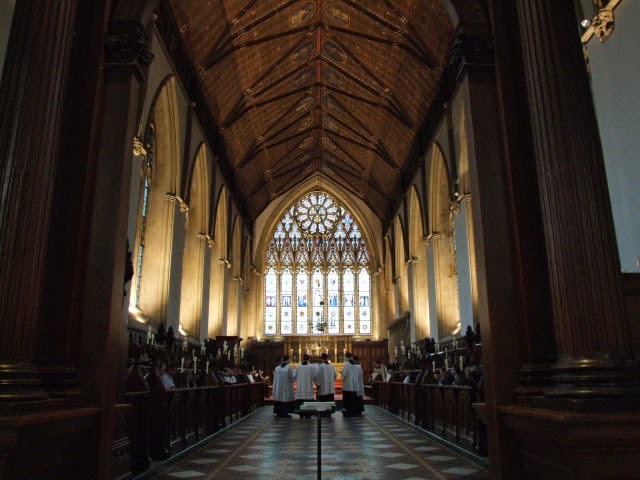 An acquaintance recently posed the following problems and questions to me:

-How do I start a group for the regular singing of Vespers?
-What type of church is most likely to host one? (diocesan TLM, Anglican Use, SSPX, western Orthodox, etc.)
-For the sake of actually getting people to attend, is it better to use the vernacular for the psalms, or should we be Latin-only purists?

Some of you may recall that, a few years ago, I wrote an article called The Divine Office as a Foundation of Culture: Why It Must Be Restored. Once upon a time, Matins, Lauds, and Vespers were considered virtually part of the Sunday obligation, alongside hearing Mass. Even in the United States, where (it seems) the Divine Hours were never observed in our cathedrals with any great devotion, the Second Plenary Council of Baltimore promoted the teaching of Gregorian chant in parochial schools so that "the greater part of the people shall thus learn to sing Vespers and the like with the ministers and the choir". The Second Vatican Council went so far as to say:

"Pastors of souls should see to it that the chief hours, especially Vespers, are celebrated in common in church on Sundays and the more solemn feasts. And the laity, too, are encouraged to recite the divine office, either with the priests, or among themselves, or even individually." (Sacrosanctum Concilium 100)

Here are my suggestions, in brief:

How to start a Vespers group

I propose looking to the members of your church's altar society and Gregorian chant schola and pitching Vespers as a once-a-month devotion to start. Think about it this way: most likely, you never have all the altar servers on your roster all together at the same time. The only exception is if you make use of choir stalls or some other sort of in choro arrangement, which can either be good (all servers not fulfilling any other function are singing the Mass with your schola chanters) or bad (they're neither singing nor serving, but are merely there for show).

Vespers is the perfect opportunity to use the "good" version of a liturgical choir. Once a month, all of your church's servers and chanters can sit within (or just outside, if there's a lack of space) the sanctuary to sing the psalms of Vespers antiphonally, one side of the church in response to the other. Traditionalists like to say that altar service is the wellspring of priestly vocations. Why not give them a glimpse of the daily regimen of prayer that seminarians sing, day and night?

What type of church is most likely to host one?

As you probably know, the public Office is effectively dead in the western Catholic Church. We can thank the influence of the Jesuits in particular, who from their inception were never bound to pray the Office, for removing quires from church spaces and banishing the Office to the realm of private priestly devotion. The Divine Hours disappeared from the public eye, making way for private devotions to fill the void. (In fact, so I've heard, most diocesan priests simply ignore their Office obligation altogether, which seems to imply that we have a crisis of priests living perpetually in a state of sin. This little aspect of the ongoing crisis in the Church is beyond the scope of my article today, though. Instead, we're going to merely think of ways to restore the Office to your own community.
In theory, all churches in the west are game for a restoration of the public Office because, unless your resident clergy are Jesuits, they're probably bound to recite the Office at least privately, anyway. In practice, even though all the Hours can be prayed by laymen alone, your priest's support is still necessary to get a public Vespers off the ground, and it may not necessarily be forthcoming. They may be afraid of having a specific time commitment, or they might have some guilt over having not prayed any of the Hours since seminary. This is why you should restrict yourself to proposing that Vespers be held just once a month to start, not every Sunday.
Churches run by traditional Latin Mass societies should, in theory, be easy to convince by appealing to tradition. The FSSP, SSPX, and Institute of Christ the King all have at least one church where Sunday Vespers is an established practice. On the other hand, Sunday Vespers doesn't usually pop into mind when old-timers reminisce about the days prior to Vatican II, and if there's no popular demand for it, these priests might feel it's a waste of energy. In this case, I would suggest pairing Vespers with Benediction of the Blessed Sacrament, as is done at the Shrine of Christ the King in Chicago. Traditional Catholics usually have a great devotion to our Lord in the Eucharist, so the chance to adore God in Benediction is a good "reward", if one could possibly call it that, for attending Vespers.
Anglican Use and Ordinariate churches are probably the easiest places to promote the public Office because the Anglican world has maintained a continuous tradition of attending Evensong up to the present day. Cranmer's hatchet-job to pre-Reformation worship in England is atrocious, but we have to give him credit for making the evening Office accessible enough for people to still enjoy attending right through the 20th century. By this, I mean reducing the number of psalms and generally making Evensong's structure less monastic in character. So, if praying Evensong is an option, I don't think you'll find much resistance from clergy here since, if the clergy and faithful are converts from Anglicanism, they'll probably remember it fondly from the days of their youth, especially when visiting the great cathedrals of England.
For those consigned to exist among the common hordes of the "Ordinary Form" world, I'm afraid I don't have any words of consolation for you. That the reformed Liturgy of the Hours was supposed to open the Office wide open to the lay faithful will probably forever remain a "nice idea". Breviaries are expensive, and the licensing for making printouts for the people in the pews can be tricky; the monthly psalter is even more frustrating than the weekly cycle of old; and even if you got past all that, the organizers would be put off by the atrocious translations and musical settings. I've never personally seen the Liturgy of the Hours sung anywhere other than at the Cathedral of Notre-Dame in Paris. Otherwise, it probably remains the preserve of a very small and dying breed of reform-of-the-reformers at conservative Catholic universities.


Is it better to use the vernacular for the psalms, or should we be Latin-only purists?

The answer will depend on who's hosting. Let's start with the TLM communities. My opinion is that the ideal for a parochial Vespers would be vernacular psalmody and Latin for the Magnificat, antiphons, and common responses. Even regular TLM-goers are overwhelmed by five all-Latin psalms back to back, and very unlikely to join in singing them. Still, even if you followed my ideal schema at a parish dedicated to the traditional Latin Mass, any priests or deacons you got to lead the Vespers would have to pray it again in private because (assuming we're talking about the 1961 Breviary) even a partly-vernacularized service wouldn't count for their daily obligation.
For Anglican Use and Ordinariate churches, Evensong is certainly best when prayed in English according to traditional English compositions. Of course, Latin settings can and should be frequently used for the Magnificat and Nunc Dimittis. I believe it's also possible to incorporate the traditional Gregorian antiphons for the psalms, and in that case, they should be sung in Latin, too.
For anyone unfortunate enough to use the Liturgy of the Hours, at least it's perfectly licit to mix Latin and vernacular and still have it count as part of one's daily obligation. In this case, more Latin is to be preferred if only to avoid the horrors of the English translation. I only wish the translations of the Psalms themselves could be substituted, and as far as I know, that's not possible.
Still, these are all just ideas off the top of my head, based on observations of human nature. I've never been able to actualize them myself. Anyone out there have a success story to share? 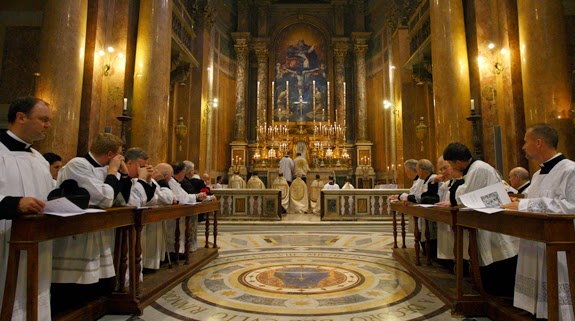 Posted by The Modern Medievalist at 3:31 PM