The importance of singing the Mass 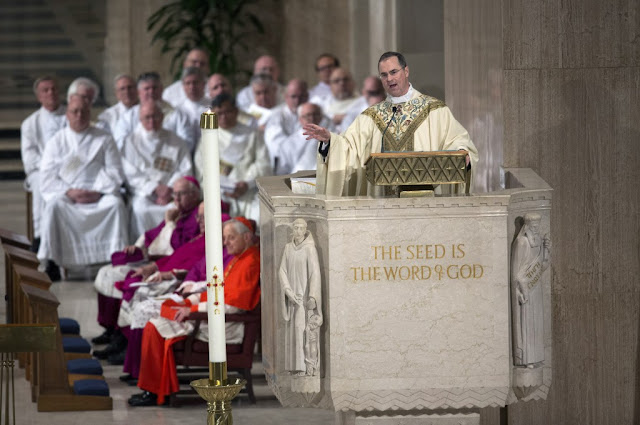 I just watched the whole funeral broadcast for Justice Scalia and have to say, that was the most reverent Mass of burial anyone could reasonably expect out of the National Shrine, given the circumstances. I could nag about certain details like the use of white instead of black vestments, or the (entirely-expected) lack of the Dies Irae, but let's face it: we will probably never again witness such a high-profile Mass with the Vice President and so many other notable persons in attendance where the Introit Requiem Aeternam is sung and the priest uses the Roman Canon, much less preaches a homily so explicitly Catholic and mindful of the four last things as what just happened this morning in Washington. Has Biden ever sat through a funeral oration where the priest began:


"We are gathered here because of one man. A man known personally to many of us. Known only by reputation to even more. A man loved by many. Scorned by others. A man known for great controversy. And for great compassion.

That man, of course, is Jesus of Nazareth."

Talk about a bait-and-switch to remember!

Here, though, I'd like to focus on a smaller detail that no other blog is likely to mention: the fact that Father Paul Scalia went so far as to sing the collects, the Preface, and a great deal of the other parts of Mass. One of the potential geniuses of the pre-conciliar rite was how it required a priest to sing the entire liturgy if there was to be any sung or solemn Mass at all. Of course, in the last couple of centuries or more, security turned to folly, and clerical laziness meant that low Mass would be the most well-trod path. With the 1970 Missal abolishing the hard distinctions between low, sung, and solemn Mass, the vast majority of priests naturally opt not to sing any of the Mass at all (except, oddly, the "by him, and with him, and in him" at the end of the Eucharistic Prayer; a phenomenon which I hope someone will explain to me some day).

Why does it matter, you might ask? Quite simply, because it takes the man's personality out of the liturgy and gives him the voice of the saints throughout the ages. Wolfgang Amadeus Mozart, of all men, has said he would have traded all of the music he ever composed in exchange for having the credit for composing the Gregorian Preface. But when a priest or other reader in the liturgy merely recites a text, he inevitably gives it his own voice; he impresses the liturgy with his own personality. As glad as I was to see Justice Clarence Thomas read the Epistle, and as dignified as his voice is, it's still distinctly Clarence Thomas reading the word of the Lord. When a lector or subdeacon chants the text in the traditional tone, it's much harder to think of its words emanating from another mere mortal's mouth. Above all, when a deacon sings the Gospel in the midst of the assembly, I think not of the man reading it, but of the words as though they were coming from Christ Himself.

Posted by The Modern Medievalist at 3:29 PM