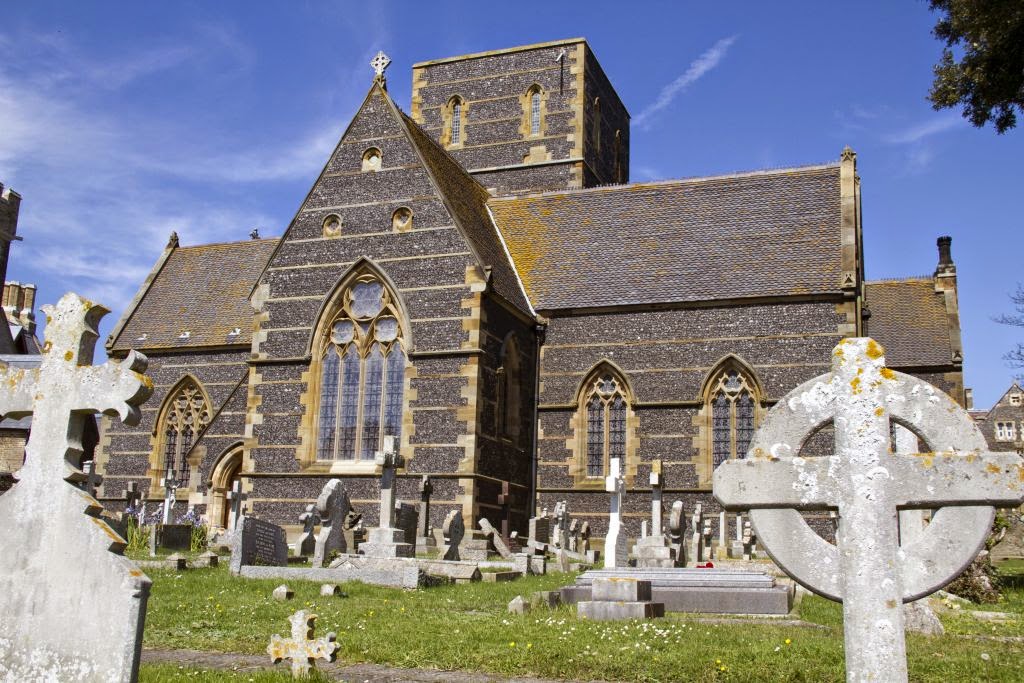 As longtime followers of this blog know, I try to repost anything of relevance to the great Gothic revival architect, Augustus Welby Pugin. I only just discovered that His Eminence Cardinal Burke, a celebrated (or controversial) American prelate who has distinguished himself over the years by championing the cause of the traditional Latin Mass and pre-Vatican II forms of the sacraments in the Catholic faith, very recently made a pilgrimage through England and celebrated pontifical solemn Mass (packed to standing room only) at the shrine of Saint Augustine, Ramsgate. This is not in reference to the famous theologian and author of the Confessions; but rather, the first archbishop of Canterbury, who was sent by Pope Gregory the Great to minister to the Britons. Pugin had a great devotion to his namesake saint, and bought property on the cliffs of Kent, near the site where Saint Augustine is believed to have first landed in England. There, in addition to his home, he built a church fully "according to the true principles of Christian architecture". What little money he was receiving from his concurrent projects at the Palace of Westminster and its great Clock Tower in London, he poured right back into the raising of this church. Indeed, the church was Pugin's not only by design, but by the fact that he used his own personal fortune to build it.... and, of course, the fact that his remains are at rest there.
Much can be said about the history and design of Saint Augustine's, but I only intended to make this post to share a few pictures of the Mass celebrated there. As well as an architect, Pugin was a liturgical enthusiast, known even to sing Latin hymns to himself on the train or while walking down the street. He designed not only churches, but all the furnishings that went with them: chalices, vestments, altar hangings, candlesticks, and every other thing that had a place in the realm of worship. I think he would appreciate that the traditional Latin Mass is once again being offered in the church he dedicated so much of his life and energy to build.
Also, the cardinal's homily, with its sketch of the history of Catholic devotion in the realm of England, is most definitely worth reading in full (you may do so here if you wish), but I quote only one paragraph:

"Coming on pilgrimage to this shrine, I cannot fail to note the example of the Catholic architect Augustus Welby Northmore Pugin, architect of this beautiful church which is also the place of his burial. Augustus Pugin was attracted to the truth of the Catholic faith through its reflection in the beauty of the great Church architecture of the Middle Ages. He, in turn, sought to express and inspire by his architecture the nobility and beauty of a Christian culture during a time in which the Christian foundations of society were already under serious threat from the radical secularism of the thinking of the so-called Enlightenment. Offering Holy Mass is this church which can rightly be called his, let us thank God for him and for the great treasure of the beauty of the faith which he has given to us."

Pictures are courtesy of Juventutem London, which may be found here and here. 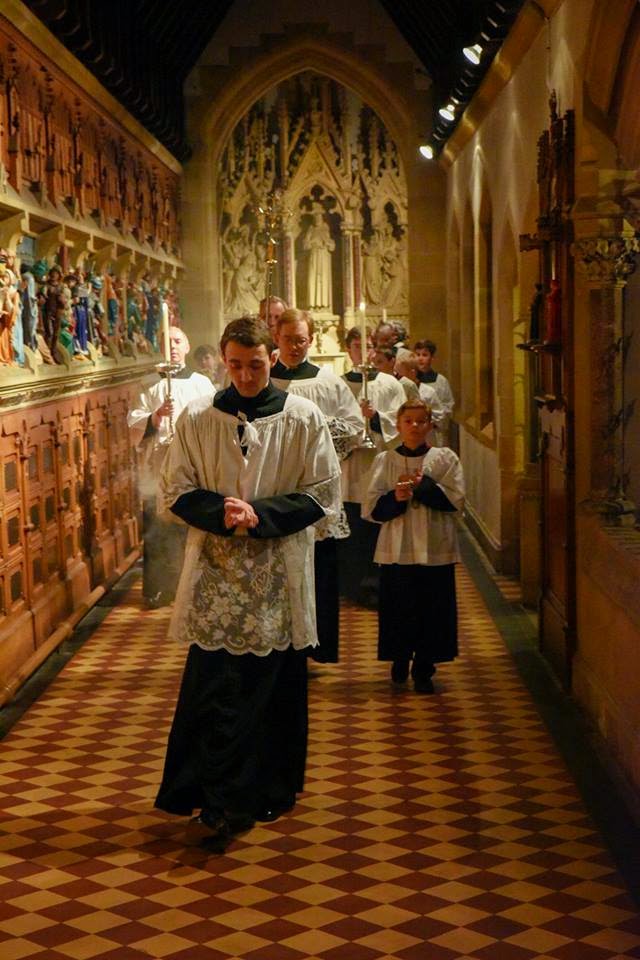 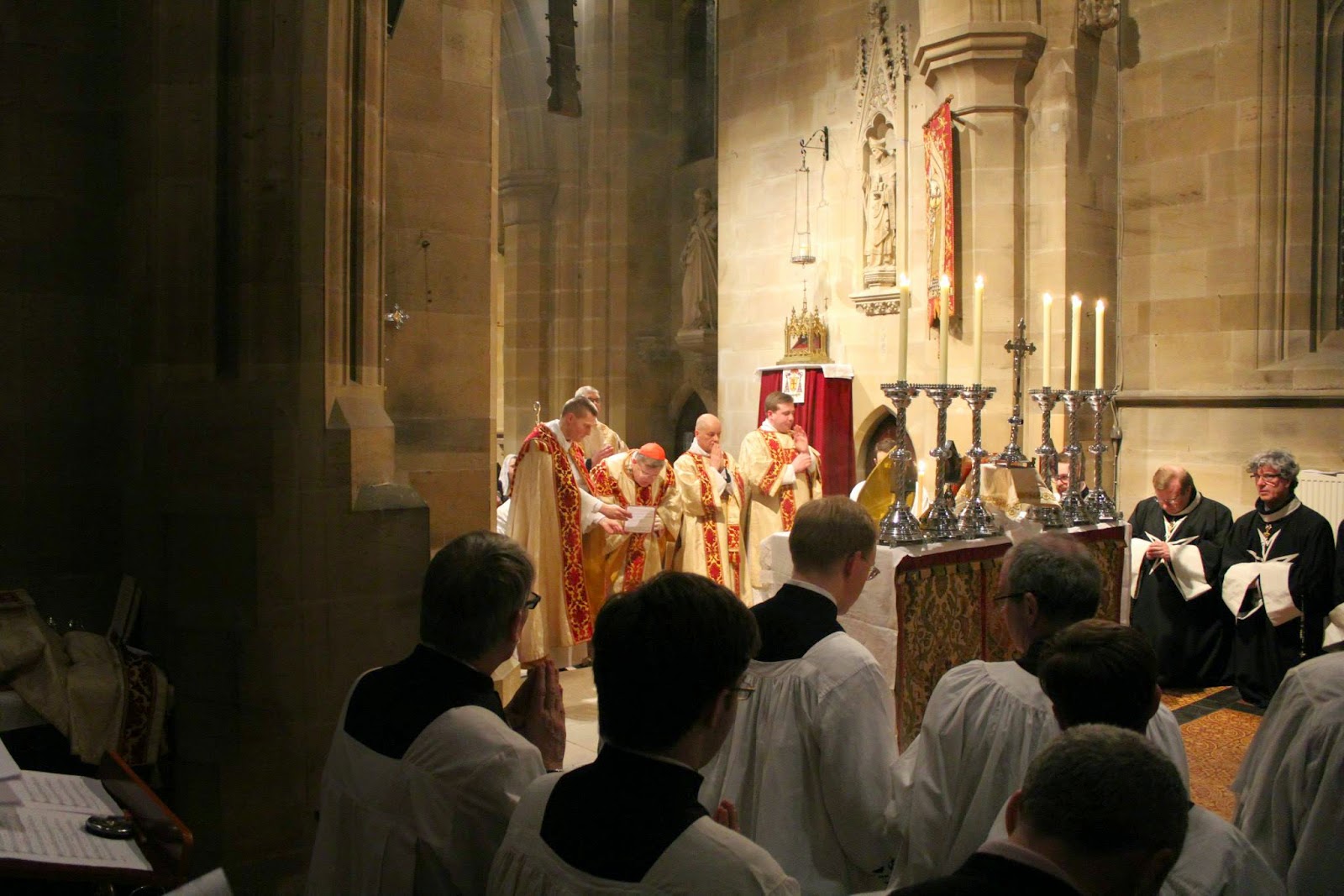 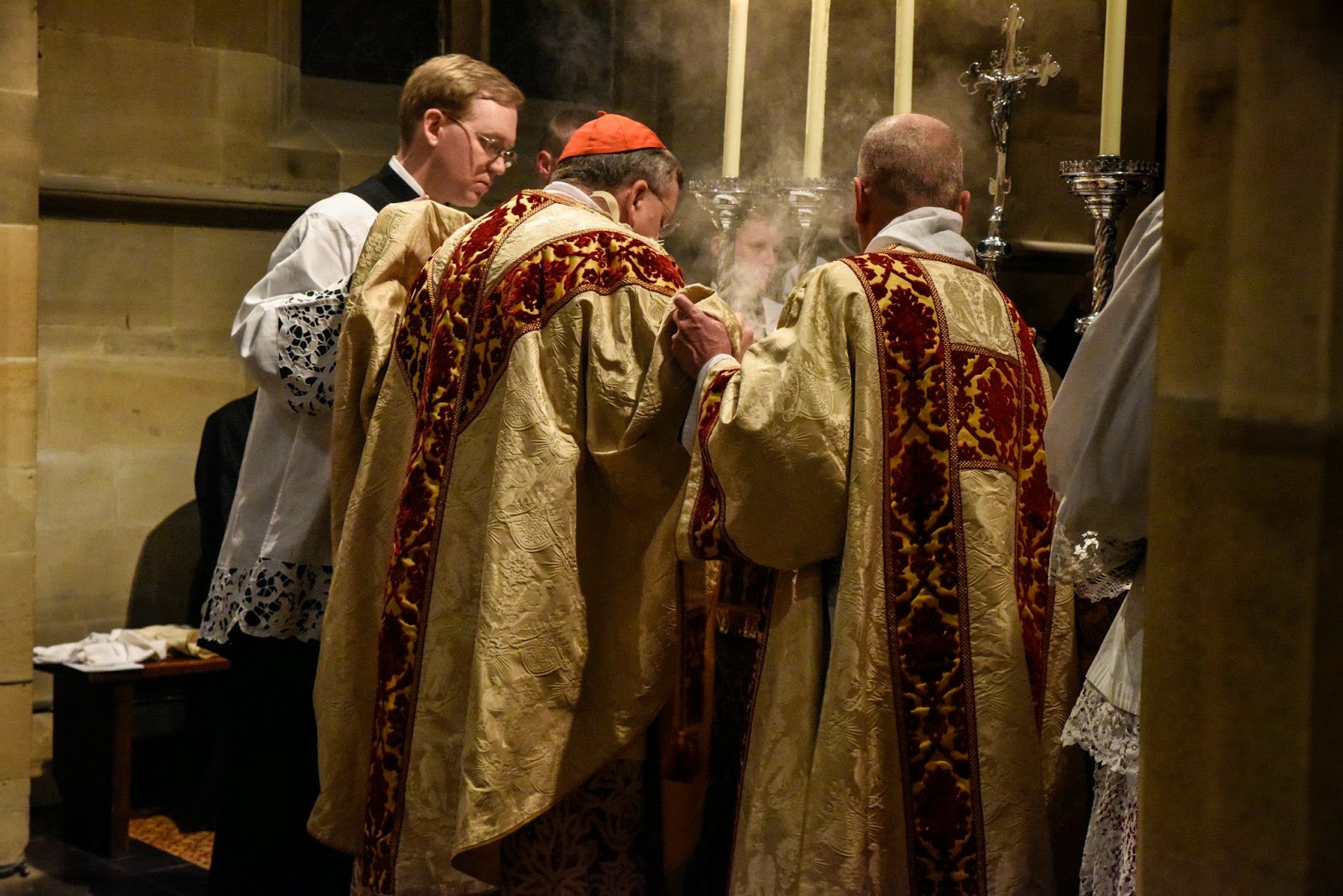 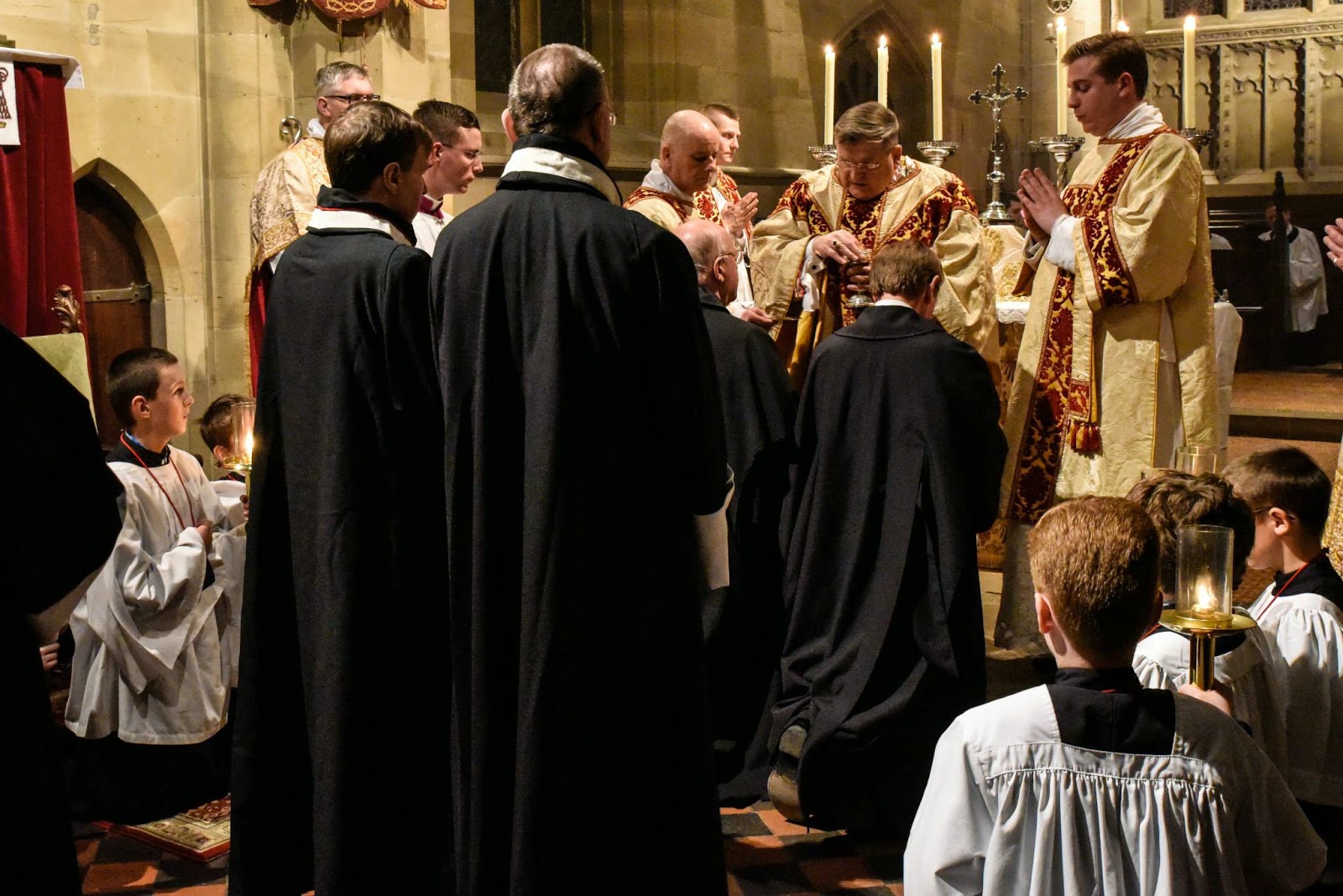 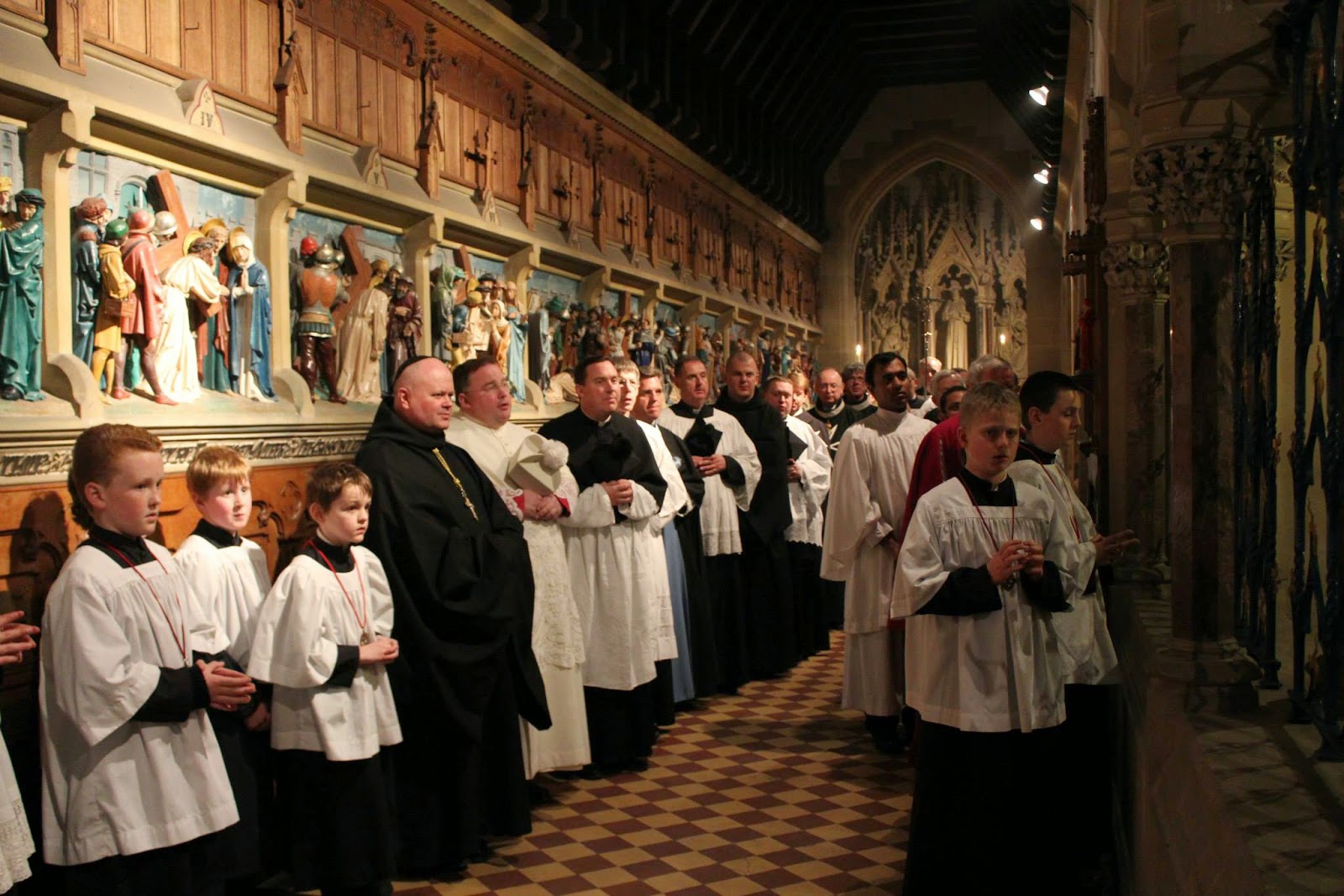 Posted by The Modern Medievalist at 7:07 PM