Anatomy of a prayer: a collect from a medieval rite of reinterment 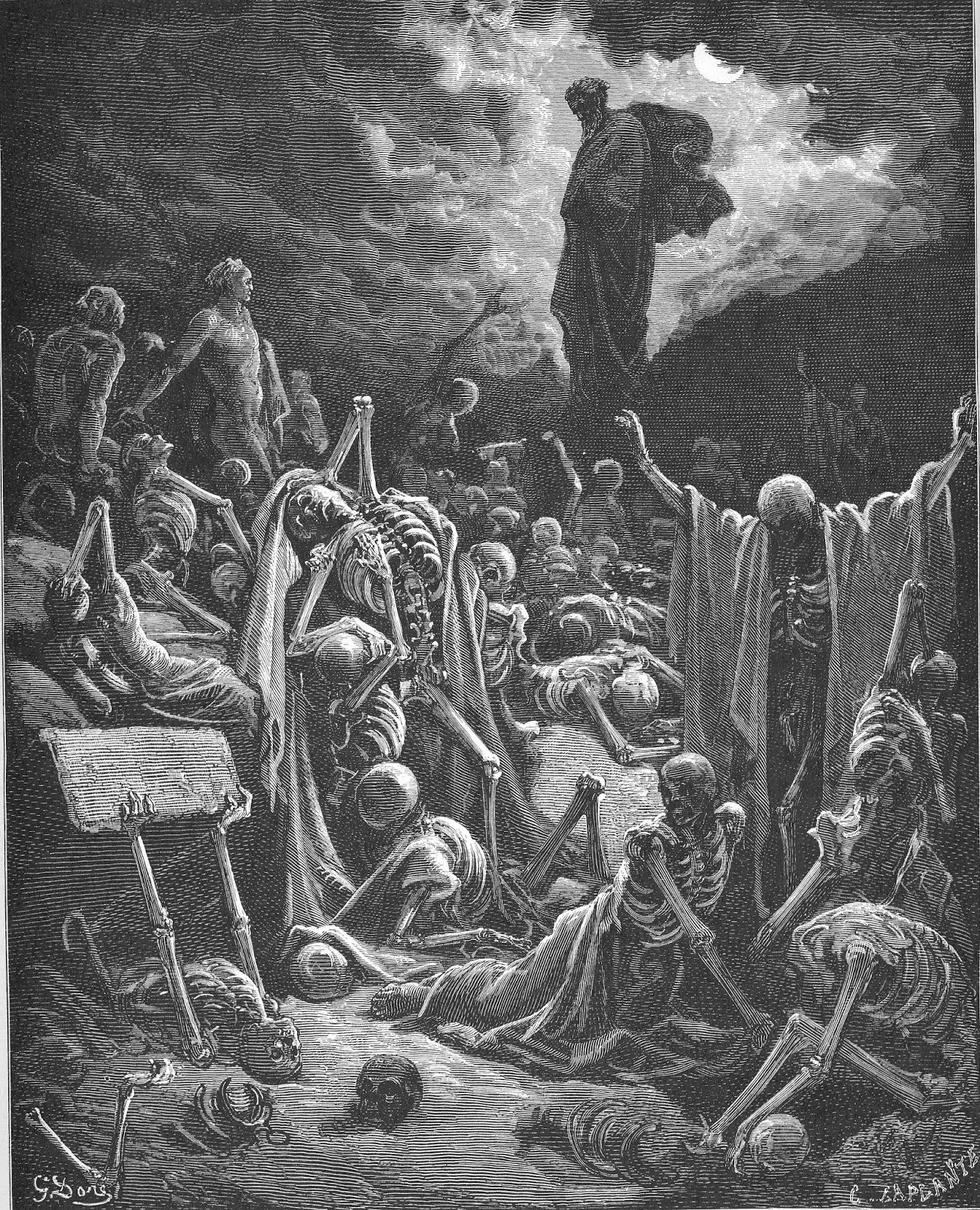 I've been following the blog called How to Rebury a King with great interest. This site is maintained by Dr. Alexandra Buckle, a musicologist and consultant for the committee that created the Anglican liturgies for the reinterment services at Leicester Cathedral this week. Not long ago, Dr. Buckle discovered an old manuscript detailing the rite of reinterment as it was used for Richard Beauchamp, Earl of Warwick (whose tomb made an appearance in my recent article on hearses and hearse-cloths). While manuscripts detailing medieval burials abound, this particular document is the only one in known existence that outlines the order of service for a reburial.
That blog's entry for today (here) shared a collect for reinterment which draws on the imagery of Ezekiel's valley of bones, but which is not known to exist anywhere else, period. Unfortunately, that prayer had a section that was purged for its overly medievalist, overly Catholic material for Thursday's service; but Dr. Buckle was gracious enough to at least post the full prayer and translation for the rest of the world to see. I'll also reproduce it here, but in reverse order.
Here's the prayer used at the service on Thursday, contemporized and purged (as seen on page 16 of the order here):

"Almighty and eternal God, creator and redeemer of souls, who by the prophecy of Ezekiel deigned to bind together dry bones with sinews, to cover them with skin and ﬂesh, and to put into them the breath of life: as we return the bones of your servant Richard to the grave, we beseech you to grant him a peaceful and quiet resting place, through Jesus Christ our Lord, who is alive and reigns with you, in the unity of the Holy Spirit, one God, for ever and ever."

Now, here's the full prayer in translation, with the excised portion in colored text:

"Let us pray. Omnipotent and eternal God, creator and redeemer of souls, who through the prophecy of Ezechiel are worthy to bind together truly dry bones with sinews, to cover them with skin and flesh, and to put into them the breath of life, we supplicants pray to you for the soul of our dear [INSERT NAME] whose bones we now place in the grave that you may deign to grant him a peaceful and quiet resting place and, that having remitted all his sins of worldly heedlessness as conceded to him by a pardon of full indulgence, that, through your ineffable mercy, you erase and wash away all of it, whatever he has erred in this world by his own or another’s guilt. Who with God the Father and the Holy Spirit lives and reigns, God through all for ever and ever. Amen."

And finally, for reference for the scholars among you, the original Latin text:

I don't blame Dr. Buckle for whatever role she had in excising the prayer. The Church of England's doings aren't any of my business; indeed, such medievalisms as "a pardon of full indulgence" and "by his own or another's guilt" would feel quite out of place there. No doubt Archbishop Cranmer came to many of the same conclusions back in the 1540's and 1550's when he took the axe to all the Catholic funerary rites as much as the populace would allow him to without rioting.
What's more tragic, I say, is that this sort of bowdlerization was exactly the same as that systematic process of destruction that Archbishop Bugnini applied with his liturgical jackhammer to the Missal, Breviary, and other sacred texts in use by the Roman Church in the wake of the Second Vatican Council. Yikes!

-The poet laureate on Richard III: the poem at the reinterment. Also, Benedict Cumberbatch.
Posted by The Modern Medievalist at 6:06 PM